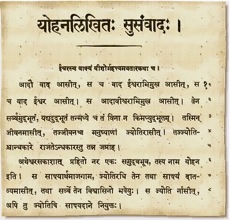 Sanskrit (संस्कृता वाक् saṃskṛtā Vāc, for short संस्कृतम् saṃskṛtam) is a classical language of India, Telugu, Kannada to get classical language status Telugu and Kannada will join Sanskrit, Pali, Prakrit and Tamil which have already been given the classical-language status. and one of the liturgical languages of Hinduism and Buddhism. : besides Pali, ; Jainism: e.g. Tattvartha Sutra and |Mahapurana, besides Shauraseni and Ardha-Magadhi Prakrit; Sikhism.

Classical Sanskrit is the standard register as laid out in the grammar of Pāṇini, around the 4th century BCE. Its position in the cultures of South]] and Southeast Asia] is akin to that of Latin and Greek in Europe and it has significantly influenced most modern languages of Nepal and India.

The pre-Classical form of Sanskrit is known as Vedic Sanskrit, with the language of the Rigveda being the oldest and most archaic stage preserved, its oldest core dating back to as early as 1500 BCE, qualifying Rigvedic Sanskrit as one of the oldest attestation of any Indo-Iranian language, and one of the earliest attested members of the Indo-European language family.

The corpus of Sanskrit literature encompasses a rich tradition of poetry and drama as well as scientific, technical, Hindu philosophical and Hindu religious texts. Today, Sanskrit continues to be widely used as a ceremonial language in Hindu religious rituals in the forms of hymns and mantras. Spoken Sanskrit is still in use in a few traditional institutions in India, and there are many attempts at revival.

The Sanskrit verbal adjective saṃskṛta- may be translated as "put together, well or completely formed, refined, highly elaborated". spokensanskrit.de dictionary, using संस्कृत or samskRta as input, It is derived from the root saṃ(s)kar- "to put together, compose, arrange, prepare", where saṃ- "together" (as English same) and (s)kar- "do, make". The language referred to as saṃskṛtā vāk "the cultured language" has by definition always been a "sacred" and "sophisticated" language, used for religious and learned discourse in ancient India, and contrasted with the languages spoken by the people, prākṛta- "natural, artless, normal, ordinary". It is also called dēva-bhāṣā meaning the "divine language" or the "language of devas or demigods".

Sanskrit is a member of the Indo-Iranian sub-family of the Indo-European family of languages. Its closest ancient relatives are the Iranian languages Old Persian and Avestan. Within the wider Indo-European language family, Sanskrit shares characteristic sound changes with the Satem languages (particularly the Slavic and Baltic languages, and also with Greek.

In order to explain the common features shared by Sanskrit and other Indo-European languages, many scholars have proposed Indo-Aryan migration hypotheses asserting that the original speakers of what became Sanskrit arrived in what is now India and Pakistan from the north-west some time during the early second millennium BCE. Evidence for such a theory includes the close relationship of the Indo-Iranian tongues with the Baltic and Slavic languages, vocabulary exchange with the non-Indo-European Finno-Ugric languages, and the nature of the attested Indo-European words for flora and fauna.

The earliest attested Sanskrit texts are Hindu texts of the Rigveda, which may be located in the Punjab region and dated to the mid-to-late second millennium BCE. No written records from such an early period survive. However, scholars are confident that the oral transmission of the texts is reliable: they were ceremonial literature whose correct pronunciation was considered crucial to its religious efficacy.[1]

From the Rigveda until the time of Pāṇini (fl. 4th century BCE) the development of the Sanskrit language may be observed in other Hindu texts the Samaveda, Yajurveda, Atharvaveda, Brahmanas, and Upanishads. During this time, the prestige of the language, its use for sacred purposes, and the importance attached to its correct enunciation all served as powerful conservative forces resisting the normal processes of linguistic change. (A history of Sanskrit literature, ISBN 8120809793, [2])

The oldest surviving Sanskrit grammar is Pāṇini's Aṣṭādhyāyī ("Eight-Chapter Grammar"). It is essentially a prescriptive grammar, i.e., an authority that defines (rather than describes) correct Sanskrit, although it contains descriptive parts, mostly to account for some Vedic forms the use of which had become rare in Pāṇini's time.

The term "Sanskrit" was not thought of as a specific language set apart from other languages, but rather as a particularly refined or perfected manner of speaking. Knowledge of Sanskrit was a marker of social class and educational attainment in ancient India and the language was taught mainly to members of the higher castes, through close analysis of Sanskrit grammarians such as Pāṇini. Sanskrit, as the learned language of Ancient India, thus existed alongside the Prakrits (vernaculars), which evolved into the Middle Indic dialects, and eventually into the contemporary modern Indo-Aryan languages.[3]