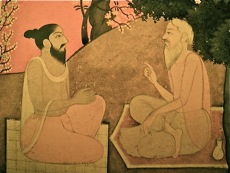 The Upanishads (Devanagari: उपनिषद्,: upaniṣad, also spelled "Upanisad") are Hindu scriptures that constitute the core teachings of Vedanta. They do not belong to any particular period of Sanskrit literature: the oldest, such as the Brhadaranyaka and Chandogya Upanishads, date to the late Brahmana period (around the middle of the first millennium BCE), while the latest were composed in the medieval and early modern period. The Upanishads realize monist ideas, some of which were hinted at in the earlier texts, and they have exerted an important influence on the rest of Hindu and Indian philosophy, and are considered one of the 100 Most Influential Books Ever Written.

The philosopher and commentator Shankara is thought to have composed commentaries on eleven mukhya or principal Upanishads, those that are generally regarded as the oldest, spanning the late Vedic and Mauryan periods. The Muktika Upanishad (predates 1656) contains a list of 108 canonical Upanishads.

The Sanskrit term upaniṣad derives from upa- (nearby), ni- (at the proper place, down) and sad, that is "sitting down near" a teacher in order to receive instruction- "laying siege" to the teacher, as Schayer puts it. Monier-Williams adds that "according to native authorities upanishad means 'setting to rest ignorance by revealing the knowledge of the supreme spirit');..." [1] A gloss of the term upaniṣad based on Shankara's commentary on the Katha Bṛhadāraṇyaka Upanishads equates it with Ātmavidyā, that is "knowledge of the Atman", or Brahmavidyā "knowledge of Brahma". Other dictionary meanings include "esoteric doctrine" and "secret doctrine".

The Upanishads speak of a universal spirit (Brahman) and an individual soul, (Atman) and at times assert the identity of both. Brahman is the ultimate, both transcendent and immanent, the absolute infinite existence, the sum total of all that ever is, was, or shall be. The mystical nature and intense philosophical bent of the Upanishads has led to their explication in numerous manners, giving birth to three main schools of Vedanta. Shankara's exegesis of the Upanishads does not describe Brahman as the God in a monotheistic sense; he ascribes to it no limiting characteristics, not even those of being and non-being. Thus, Shankara's philosophy is named advaita, "not two" as opposed to dvaita, founded by Madhvacharya, which holds that Brahman is ultimately a personal God, to be aligned with Vishnu, or Krishna (brahmano hi pratisthaham, I am the Foundation of Brahman Bhagavad Gita 14.27). The third major school of Vedanta is Vishishtadvaita, founded by Ramanujacharya and it has some aspects in common with the other two.

The ninth chapter of the Taittiriya Upanishad says:

He who knows the Bliss of Brahman (divine consciousness)... does not distress himself with the thought "why did I not do what is good? why did I do what is evil?". Whoever knows this (bliss) regards both of these as Atman (self, soul), indeed he cherishes both as Atman. Such, indeed, is the Upanishad, the secret knowledge of Brahman.

The key phrase of the Upanishads, to Advaita Vedanta, is तत् त्वं अिस "Tat Tvam Asi" (That thou art). Vedantins believe that in the end, the ultimate, formless, inconceivable Brahman is the same as our soul, Atman. We only have to realize it through discrimination. (However, interpretations of this phrase differ.) Verses 6, 7 & 8 of Isha Upanishad:

Whoever sees all beings in the soul and the soul in all beings...What delusion or sorrow is there for one who sees unity?
It has filled all. It is radiant, incorporeal, invulnerable...Wise, intelligent, encompassing, self-existent,..It organizes objects throughout eternity.

The Upanishads also contain the first and most definitive explications of the divine syllable Aum or OM, the cosmic vibration that underlies all existence. The mantra "Aum Shanti Shanti Shanti" (the soundless sound, peace, peace, peace) is often found in the Upanishads. Devotion to God is foreshadowed in Upanishadic literature, and was later realized by texts such as the Bhagavad Gita.

The following list includes the eleven "principal" (mukhya) Upanishads commented upon[2] by Shankara, and accepted as shruti by most Hindus. Each is associated with one of the four Vedas (Rigveda (ṚV), Samaveda (SV), White Yajurveda (ŚYV), Black Yajurveda (KYV), Atharvaveda (AV));

The Kauśītāki and Maitrāyaṇi Upanishads are sometimes added. All these date from before the Common Era. From linguistic evidence, the oldest among them are the Bṛhadāraṇyaka and Chāndogya Upanishads. The Jaiminīya Upaniṣadbrāhmaṇa, belonging to the late Vedic Sanskrit period, may also be included. Of nearly the same age are the Aitareya, Kauṣītaki and Taittirīya Upaniṣads, while the remnant date from the time of transition from Vedic to Classical Sanskrit.

Later Upanisads are often highly sectarian: this was "one of the strategies used by sectarian movements to legitimate their own texts through granting them the nominal status of Śruti." For the most part, the canonical Shakta Upanishads are sectarian tracts reflecting doctrinal and interpretative differences between the two principal sects of Srividya upasana (a major Tantric form of Shaktism). As a result, the many extant listings of "authentic" Shakta Upanisads vary in content, reflecting the sectarian bias of their compilers:

"Past efforts to construct lists of Shakta Upanisads have left us no closer to understanding either their 'location' in Tantric tradition or their place within the Vedic corpus. [...] At stake for the Tantric is not the authority of sruti per se, which remains largely undisputed, but rather its correct interpretation. For non-Tantrics, [it is a text's] Tantric contents that brings into question its identity as an Upanisad. At issue is the text's classification as sruti and thus its inherent authority as Veda."

Of the texts listed in the Muktika Upanishad nine are classified as Shakta Upanishads:

The list excludes several notable and widely used Shakta Upanisads, including the Kaula Upaniṣad, the Śrīvidyā Upaniṣad and the Śrichakra Upaniṣad.

Renown outside of India

The Vedas became known outside of India when the Upanishads were translated from Sanskrit. At first, they were translated into Persian. This was done as a result of Emperor Akbar's liberal religious attitude. (Parts of this account are taken from the Introduction to Max Müller's The Upaniṣads}}, Part I.) The prince Shah Jehan, who was influenced by the Emperor and shared Akbar's viewpoint, had an eldest son named Dara Shikoh. Shikoh was, like his father, a liberal Muslim and wrote a book that attempted to reconcile Islam with Hinduism. In 1640, Dara Shikoh visited Kashmir and met pandits, who told him about the Upanishads. Later, he invited pandits from Benares to come to Delhi, which was under Mughal control, in order to assist him in translating the Upanishads. In 1657, the translation of the Upanishads into Persian was completed. In his translation, known by the name Sirr-e-Akbar (The Greatest Mystery), he states at the Introduction that the work referred to in the Qur'an as the "Kitab al-maknun" or the hidden book is none other than the Upanishads. Two years later, in 1659, his brother Aurangzib, who was a strict Muslim, had him executed under the Sharia law as an apostate from Islam. This may have been a pretext, because Shikoh had been the eldest son and Aurangzib ascended the throne after Shikoh's execution.;the prince was put to death by his brother Aurangzib, in reality, no doubt, because he was the eldest son and legitimate successor of Shah Jehan, but under the pretext that he was an infidel, and dangerous to the established religion of the empire." Max Müller, The Upaniṣads, Part I, "Introduction," p. lvii.

In 1775, the French scholar Anquetil Duperron received a manuscript of part of the Upanishads from Guillaume Le Gentil, who resided at the court of Shula ud daula. Duperron requested the remaining part and then collated the two parts. He translated them into both French and Latin. The French version was never published but the Latin translation was published in 1801. The Latinized title was Oupnek'hat. The German philosopher Arthur Schopenhauer read the Latin translation and extravagantly

"How imbued is every line with firm, definite, and harmonious significance! From every page we come across profound, original, and sublime thoughts, whilst a lofty and sacred earnestness pervades the whole. ; it is the most profitable and sublime reading that is possible in the world; it has been the consolation of my life and will be that of my death." Schopenhauer, Parerga and Paralipomena, Vol. II, § 182.

praised it in his main work, The World as Will and Representation, which was published in 1819]], as well as in his Parerga and Paralipomena, In Chapter XVI, "Some Remarks on Sanskrit Literature." (1851). He found that the Upanishads accorded with his own philosophy, which taught that the individual is a manifestation of the one basis of reality. For Schopenhauer, that fundamentally real underlying unity is what we know in ourselves as "will." Another German philosopher, Friedrich Wilhelm Joseph Schelling, praised the mystical and spiritual aspects of the Upanishads. Schelling and other members of the German Idealist group were dissatisfied with Christianity and became fascinated with the Vedas and the Upanishads. Similarly minded English and European writers, such as Thomas Carlyle, Victor Cousin, Samuel Taylor Coleridge, and Anne Louise Germaine de Staël, claimed to find deep wisdom in these; Western writings. In the United States, the group known as the Transcendentalists were influenced by Schelling's German Idealists. These Americans, such as Emerson and Thoreau, were not satisfied with traditional Christian mythology and therefore embraced Schelling's interpretation of Kant's Transcendental idealism, as well as his celebration of the romantic, exotic, mystical aspect of the Upanishads. As a result of the influence of these writers, the Upanishads gained renown in Western countries.