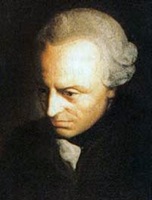 Immanuel Kant (1724–1804), German philosopher. In the Critique of Pure Reason (1781) he countered Hume's skeptical empiricism by arguing that any affirmation or denial regarding the ultimate nature of reality (“noumenon”) makes no sense. His Critique of Practical Reason (1788) affirms the existence of an absolute moral law—the categorical imperative.

He is one of the most influential philosophers in the history of Western philosophy. His contributions to metaphysics, epistemology, ethics, and aesthetics have had a profound impact on almost every philosophical movement that followed him. This article focuses on his metaphysics and epistemology in one of his most important works, The Critique of Pure Reason. A large part of Kant’s work addresses the question “What can we know?” The answer, if it can be stated simply, is that our knowledge is constrained to mathematics and the science of the natural, empirical world. It is impossible, Kant argues, to extend knowledge to the supersensible realm of speculative metaphysics. The reason that knowledge has these constraints, Kant argues, is that the mind plays an active role in constituting the features of experience and limiting the mind’s access only to the empirical realm of space and time.

Kant responded to his predecessors by arguing against the Empiricists that the mind is not a blank slate that is written upon by the empirical world, and by rejecting the Rationalists’ notion that pure, a priori knowledge of a mind-independent world was possible. Reason itself is structured with forms of experience and categories that give a phenomenal and logical structure to any possible object of empirical experience. These categories cannot be circumvented to get at a mind-independent world, but they are necessary for experience of spatio-temporal objects with their causal behavior and logical properties. These two theses constitute Kant’s famous transcendental idealism and empirical realism.

Kant’s contributions to ethics have been just as substantial, if not more so, than his work in metaphysics and epistemology. He is the most important proponent in philosophical history of deontological, or duty based, ethics. In Kant’s view, the sole feature that gives an action moral worth is not the outcome that is achieved by the action, but the motive that is behind the action. And the only motive that can endow an act with moral value, he argues, is one that arises from universal principles discovered by reason. The categorical imperative is Kant’s famous statement of this duty: “Act only according to that maxim by which you can at the same time will that it should become a universal law.” IEP