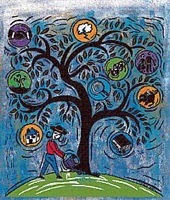 b. An institution founded and supported by an endowment.

1. To establish or set up, especially with provision for continuing existence: "The college was founded in 1872".

2. To establish the foundation or basis of; base: found a theory on firm evidence.

SYNONYMS found, create, establish, institute, organize. These verbs mean to bring something into existence and set it in operation: founded a colony; created a trust fund; establishing a business; instituted an annual benefit concert; organizing a field trip.

Is there not one foundation upon which we all do build;

the embrace of mutual adoration between Parent and child?

Does this not compose the beginning and end of all desires,

that if we replace with another, leaves us exiled?

Then again, the returning, accomplished with but a smile,

affirming in this moment what we've known all the while,

that our riches are within us while around us we see,