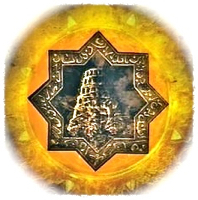 A Planetary Prince's corporeal staff early organize the planetary schools of training and culture, wherein the cream of the evolutionary races are instructed and then sent forth to teach these better ways to their people. These schools of the prince are located at the material headquarters of the planet.

Much of the physical work connected with the establishment of this headquarters city is performed by the corporeal staff. Such headquarters cities, or settlements, of the early times of the Planetary Prince are very different from what a Urantia mortal might imagine. They are, in comparison with later ages, simple, being characterized by mineral embellishment and by relatively advanced material construction. And all of this stands in contrast with the Adamic regime centering around a garden headquarters, from which their work in behalf of the races is prosecuted during the second dispensation of the universe Sons.

In the headquarters settlement on your world every human habitation was provided with abundance of land. Although the remote tribes continued in hunting and food foraging, the students and teachers in the Prince's schools were all agriculturists and horticulturists. The time was about equally divided between the following pursuits:

For lessons on the topic of Planetary Headquarters, follow this link.

1. Physical labor. Cultivation of the soil, associated with home building and embellishment.

4. Vocational training. Schools of marriage and homemaking, the schools of art and craft training, and the classes for the training of teachers--secular, cultural, and religious.

5. Spiritual culture. The teacher brotherhood, the enlightenment of childhood and youth groups, and the training of adopted native children as missionaries to their people.

A Planetary Prince is not visible to mortal beings; it is a test of faith to believe the representations of the semimaterial beings of his staff. But these schools of culture and training are well adapted to the needs of each planet, and there soon develops a keen and laudatory rivalry among the races of men in their efforts to gain entrance to these various institutions of learning.

From such a world center of culture and achievement there gradually radiates to all peoples an uplifting and civilizing influence which slowly and certainly transforms the evolutionary races. Meantime the educated and spiritualized children of the surrounding peoples who have been adopted and trained in the prince's schools are returning to their native groups and, to the best of their ability, are there establishing new and potent centers of learning and culture which they carry on according to the plan of the prince's schools.