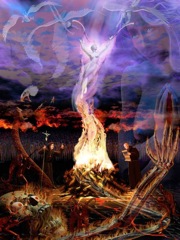 [ME. caracter(e, a. F. caractere, ad. L. charact{emac}r, a. Gr. instrument for marking or graving, impress, stamp, distinctive mark, distinctive nature, f. to make sharp, cut furrows in, engrave; or perhaps a refashioning of the earlier F. caracte after this. In Eng. it was further assimilated in 16th c. by (fictitious) spelling with ch-. (Wyclif used both caracte and caracter; he may have taken the latter directly from Latin, as Littré cites F. caractère only from 15th c. In 16-17th c. often cha{sm}racter.]

For lessons on the topic of Character, follow this lesson.

1. a. A distinctive mark impressed, engraved, or otherwise formed; a brand, stamp.

b. fig. with distinct reference to the literal sense.

2. A distinctive significant mark of any kind; a graphic sign or symbol.

3. a. esp. A graphic symbol standing for a sound, syllable, or notion, used in writing or in printing; one of the simple elements of a written language; e.g. a letter of the alphabet.

c. Computers. One of a set of letters, digits, or other symbols which can be read, stored, or written by a computer and used to denote data; also, a representation of such a symbol by means of a small number of bits, holes in punched tape, etc., arranged according to a specified code and taken as a unit of storage.

b. The series of alphabetic signs, or elementary symbols, peculiar to any language; a set of letters.

c. The style of writing peculiar to any individual; handwriting.

d. Kind or style of type or printed letter.

5. A cabbalistic or magical sign or emblem; the astrological symbol of a planet, etc.; = CHARACT 2.

7. A cipher for secret correspondence.

8. a. A distinctive mark, evidence, or token; a feature, trait, characteristic. arch. in gen. use.

b. now esp. in Natural History. One of the distinguishing features of a species or genus. See also acquired character s.v. ACQUIRED ppl. a. (c).

9. The aggregate of the distinctive features of any thing; essential peculiarity; nature, style; sort, kind, description.

11. The sum of the moral and mental qualities which distinguish an individual or a race, viewed as a homogeneous whole; the individuality impressed by nature and habit on man or nation; mental or moral constitution.

12. a. Moral qualities strongly developed or strikingly displayed; distinct or distinguished character; character worth speaking of.

13. a. The estimate formed of a person's qualities; reputation: when used without qualifying epithet implying ‘favourable estimate, good repute.’

b. transf. of things.

c. by character: by repute or report. in (great) character: in (good) repute. Obs.

14. a. A description, delineation, or detailed report of a person's qualities.

c. esp. A formal testimony given by an employer as to the qualities and habits of one that has been in his employ.

16. a. A person regarded in the abstract as the possessor of specified qualities; a personage, a personality.

17. a. A personality invested with distinctive attributes and qualities, by a novelist or dramatist; also, the personality or ‘part’ assumed by an actor on the stage.