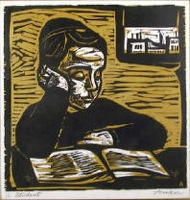 The word student is etymologically derived through Middle English from the Latin second-type conjugation verb studēre, meaning "to direct one's zeal at"; hence a student could be described as "one who directs zeal at a subject". In its widest use, student is used for anyone who is learning.

"Freshman" and "sophomore" are sometimes used figuratively, almost exclusively in the United States, to refer to a first or second effort ("the singer's sophomore album"), or to a politician's first or second term in office ("freshman senator") or an athlete's first or second year on a professional sports team. "Junior" and "senior" are not used in this figurative way to refer to third and fourth years or efforts, because of those words' broader meanings of "younger" and "older." A junior senator is therefore not one who is in a third term of office, but merely one who has not been in the Senate as long as the other senator from their state. Confusingly, this means that it is possible to be both a "freshman Senator" and a "senior Senator" simultaneously: for example, if a Senator wins election in 2008, and then the other Senator from the same state steps down and a new Senator elected in 2010, the former Senator is both senior Senator (as they have been in the Senate for two years more) and a freshman Senator (since they are still in their first term).