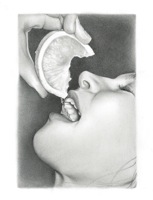 Taste (or, more formally, gustation; adjectival form: "gustatory") is a form of direct chemoreception and is one of the traditional five senses. It refers to the ability to detect the flavor of substances such as food, certain minerals, and poisons. In humans and many other vertebrate animals the sense of taste partners with the less direct sense of smell, in the brain's perception of flavor. In the West, experts traditionally identified four taste sensations: sweet, salty, sour, and bitter. In the Eastern hemisphere, piquance (the sensation provided by, among other things, chili peppers) and savoriness (also known as umami) have been traditionally identified as basic tastes as well. More recently, psychophysicists and neuroscientists have suggested other taste categories (fatty acid taste most prominently, as well as the sensation of metallic and water tastes, although the latter is commonly disregarded due to the phenomenon of taste adaptation. Taste is a sensory function of the central nervous system. The receptor cells for taste in humans are found on the surface of the tongue, along the soft palate, and in the epithelium of the pharynx and epiglottis.[1]

The sensation of taste can be categorized into five basic tastes: sweetness, sourness, saltiness, bitterness, and umami. Taste buds are able to differentiate among different tastes through detecting interaction with different molecules or ions. Sweet, umami, and bitter tastes are triggered by the binding of molecules to G protein-coupled receptors on the cell membranes of taste buds. Saltiness and sourness are perceived when alkali metal or hydrogen ions enter taste buds, respectively. As taste senses both harmful and beneficial things, all basic tastes are classified as either aversive or appetitive, depending upon the effect the things they sense have on our bodies. Sweetness helps to identify energy-rich foods, while bitterness serves as a warning sign of poisons.

The taste designers. And how can you be told of these artists! Faintly I might suggest that they are improvers of morontia taste, and they also endeavor to increase the appreciation of beauty through the sharpening of the evolving spirit senses.[2]