One of the things you all should hear is that Urantia is about to receive a cleansing not attempted since the times of Caligastia and Lucifer’s folly that nearly destroyed portions of the Satania System. To speak to this cleansing and to understand what it entails, the reader needs to take on the study of the “Borderland”. The Borderland is a real place and it exists between the morontia energies of the system of Satania and the etheric, which is a place on Urantia where we depend on the grid support and become the brief receptacle of former human habitation on Urantia.

The small diagram shown here attempts to provide the reader an idea of its location and distance from earth. Today, it is a borderland that causes Urantia many problems of stability in a way that prevents the Magisterial Mission from immediately transforming Urantia into a veritable laboratory for the succession of ages. 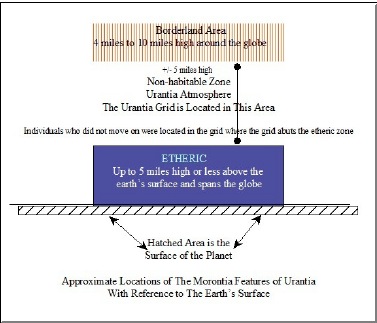 The Borderland is nearly exhausted as far as the number of events and incidences that may be found there; however, there are reasons to believe that it contains about 1,000,000 different egregores 1 that have to be eliminated in order that the Magisterial Mission may proceed without having to take time to further clear this area out. It takes about four years for a normal human to achieve the ability to cleanse these areas under the instructions of the Melchizedeks. In this case at the present time, we (Christ Michael) are requesting that all areas marked Borderland become subject to the Ancients of Days special envoy who is the Master Son of Nebadon and those he designates as fellow envoys to the project.

the Borderland and to the Etheric. As a thought form it contains fear and residual pictures of horror and were used effectively by Caligastia to maintain trapped souls in their place. The danger to humans is through the use of mind areas which abut the morontia circuits used by the Creative Spirit to maintain the mind adjutants and other finite mind maintenance. Accidental access to these egregores can cause harm through excessive fear or paranoia to normal, every-day events in the waking and sleeping states. Under no circumstances should individuals attempt to enter the borderland area

without Melchizedek instructors in attendance.]

Monsanloran Melchizedek: Hello this is Monsanloran. There will be training and activity to learn how to move between the "two worlds" [the Borderland and the normal surface of Urantia] as you say. You should certainly have no fear for you will be with us and kept well in hand.

You all are certainly capable of doing this job. Groups who have proved that we can count on them and who have shown great effort to maintain the work assigned will again be counted on to do this work. We will take you on some trips to not only in "the world between both worlds", but also on to the Mansion Worlds. Being able to remember your adventure will be our little present for you. When and how will we be doing this? That explanation will have to wait a little bit, and it has to remain a “mystery” for the time being. You will probably love this little, out of time, adventurous journey. Thank you my children and I say goodbye to you.

AYA, Master Spirit Seven of Orvonton: Indeed my children, those who are chosen to work with us will participate with great steps into uncharted areas of existence. The envoys of Michael will be part of the "short trips" that you will make with us between the Borderland and on Mansonia.

I came to announce this undertaking now because you have to know that this is a project that comes from the highest authorities of our superuniverse and under the guidance and agreement of The Ancient of Days. It was an agreement Christ Michael sought and was waiting for and which he now has received.

When you come to work with Michael and the Melchizedeks and have been satisfactorily prepared, than much later, very much later in your careers, you may help with this work on other planets to "clean", as you say, the "remaining non-dissolved" human emotions.”

On a normal evolutionary planet this is done by The Midwayers and they are always in sufficient numbers to help in this work. However here on Urantia lots of Midwayers were lost to the rebellion and are in rehabilitation and some are already rehabilitated and returned to Urantia. We also have many Angels in the same situation as the Midwayers.

In addition, on Urantia, there is an abnormal quantity of souls who do not wish to depart, so there remains many etheric soul issues , many packets of emotions remaining here which should be dissolved. In addition there exists all these "Thought-Forms" of fear, horror, anguish, anger and hate that have been created here "artificially"2 for thousands of years and especially during the last 200 years by the former Planetary Prince (Caligastia), and by his followers who were still free to continue the game in which they were engaged.

alive and bearing fruit as independent energetic constructions. While these forms have no will of their own, they do propagate some more and related thought forms akin to their original intention. For instance, a thought form which expresses hate does so to control actions of both the originator and the victim. Such a thought form can also attach itself to others who are not involved in the original intention of the originator, but because these forms propagate, they infect bystanders to the degree they harbor similar emotions. It is in this way that a whole society can become infected with greed or lust for money and power, and may be seen in the western cultures of America and Europe today, and it

is these egregores,– actual bundles of thought forms– which are quickly infecting the rest of Urantia.]

Thus there are much more “cleaning” works to do with lesser Midwayers than on a planet with a normal evolution and full compliment of these wonderful creatures.

This is largest problem we have on Urantia right now, and it will be resolved with the work of a quota of human volunteers here on Earth who we will train to clean these forms up. They will work together with the “Specialized Midwayers [Editor: term not further defined] in this work and with some [unrevealed] Angels that you do not know and who will help us in this assignment. It is not a normal job for Angels to do, but in this case we had to appeal to a reserve corps of Angels to help us.

Beware of any mortal who approaches you who has not received training and that you do not know with certainty that they have followed training. Beware of people who say they are capable of doing the work of cleaning up the "dark energy or wandering souls" as you called them before. It can not be overstressed that the premature release of these situations can cause bodily harm and irreparable scar the human thought processor for life on Urantia. These are energies associated with the past that has cause Urantia so much suffering, and they will not be dispelled quickly or easily without a lot of approachable reasoning to be given to both the living soul if involved, or the parasitic thought form which faces annihilation at the hands of the Michael envoys consisting of mortals, Melchizedeks, angels, midwayers, and a host of others not revealed to you.

These thought forms and souls of people were delude themselves, and they are collectively likely to have major issues while defending their existence as they are and the games of thought which maintain them. These energies of soul invested with personal will and associated thought forms do not have the necessary capacity to understand they require help to dissolve the horror of existence most have lived with for centuries. Those who claim to know how to cleanse these areas without training do not have the protection and understanding of the game they intervene into and have not the capacity to deal with this problem.

Thank you. This will be all for today. I am Aya, the Master Spirit of your young universe of Nebadon.

Malvantra Melchizedek: We wish to express a brief word to the readership of this publication, The Flurry, as it is being called. The subject of souls and personality has confounded a whole group of Urantia Book readers who argue that the soul, once disposed of the earthly tabernacle of the body, loses the personality that was bestowed in the mortal mind and function through the mind to express will choices.

Let it be known that upon death on Urantia, and this is a situation which has been modified as reported in the 1934 disclosures in the text of the Urantia Book, the soul now when liberated is required to make a choice to continue on. It does so because Christ Michael has determined that the source of problems on Urantia are the liberated souls which have not determined who they are and who or what is in charge of their spiritual life. In order to make a deep impression on those souls who are confused by death, the Michael government has decreed that all who leave the body must see the LIGHT which is plainly visible to all at death and soul liberation.

The LIGHT is always on the left side of the person, or that person’s left, and it shines from above at about a forty-five degree angle so as to hit the eye sensors of the soul immediately upon departing the body. That millions of souls could not locate the LIGHT was not a sensory problem, but a delusional phenomena which creates a stubborn reflex in the soul-self.

Christ Michael has a policy of allowing the personality bestowal to remain in the morontia mind of the soul, just as it would reside on the mansion worlds after resurrection. The purpose of maintaining a personality presence in the conscious soul after death is to obtain from them a decision– a spiritual decision– based on hope, faith, and helped by the intuitive sense, to go toward that which beckons much like a star on a very dark night.

Angels and other morontia care takers are always present, just slightly out of sight of the soul freshly gone out of the body, and when a decision is made, even tentatively, Mother Spirit signals the Angels to sweep the nascent ascender into their arms, place the person in the rest of death, and to be resurrected at the appropriate time that is in accordance with that soul’s spiritual status at the close of mortal life. Thereafter, the description of sleep, resurrection, and the enabling of the new morontia ascender is as described in the revelation.

How long this policy will be kept in place on Urantia we do not know. On no other Satania world are souls forced to make decisions as they are on Urantia. We do not know how this changes the soul, or even if it does, but we conclude that Michael knows what he is doing. We sincerely hope this is sufficient to inform about how mortal death on Urantia does not automatically detach the personality or the viability of the soul until the decision is made to walk to the beckoning LIGHT of the spiritual star all see. Thank you.