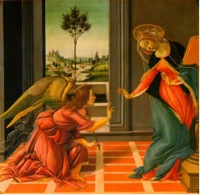 From Latin perfect passive participle adventus, coming to, from verb advenire, come to, from prefix ad-, to, + verb venire, come

The Advent season encompasses immensely rich and varied family observances. The custom of the Advent wreath enjoys widespread popularity in the West. On the Advent wreath, constructed from a circle of evergreens surmounted by four candles (usually three purple and one rose colored), Christians light one additional candle each week during the four weeks of Advent. In some families the wreath is lighted before the evening meal to the accompaniment of brief prayers and often the singing of the Advent carol O Come, O Come, Emmanuel. Among Western Christians three traditional feasts during Advent are regaining the popularity they had in earlier centuries: Saint Barbara's Day (December 4), when a dormant branch of flowering cherry, known as the Barbara branch, is brought indoors and blooms on or near Christmas Day; the Feast of Saint Nicholas (December 6), which is often celebrated with small gifts placed in the children's shoes left outside bedroom doors on the eve of the feast; and the Feast of Santa Lucia (December 13, usually the date of the earliest sunset of the year), which is observed with customs dating from pre-Christian times and features saffron-yellow yeast buns, known as Lucia cakes, baked in the form of a spiral sun.

Among Hispanic people the last nine days of Advent are known as Posadas ("lodgings"). Children, portraying Mary and Joseph seeking shelter on their way to Bethlehem, go from door to door and are turned away repeatedly. Finally, the last home welcomes them, which then becomes the site of a joyful service and feast.

The principal festivals of fixed date are those associated with the nativity of Jesus. In Rome by 336 such a festival on December 25 marked the beginning of the year. Earlier (perhaps from the beginning of the second century) in the Eastern churches the festival of the nativity known as Epiphania or Theophania, terms associated in classical Greek with the human manifestation of a deity, was set on January 6. In some churches the themes of Christ's baptism in the Jordan and his first miracle at Cana were celebrated on or near that same day.

The coincidence of the Roman date for the Feast of the Nativity, December 25, with the date of Natalis Solis Invicti, a winter solstice festival established by the emperor Aurelian in 274 CE, has encouraged the hypothesis that Christmas represents a Christian appropriation of the solstice festival, and similar pagan backgrounds have been proposed for the Epiphany festival on January 6. Contrary to this prevailing view, Louis Duchesne in his Christian Worship (London, 1903) suggests that those dates were computed as nativity dates from the inclusion of the Incarnation (i.e., the conception of Christ) in the themes celebrated at Pascha on known fixed dates, March 25 in Africa and Rome, April 6 in Asia Minor and elsewhere in the East. In modern times, March 25 is celebrated as the Feast of the Annunciation (the conception of Christ) nine months before Christmas, except among the Armenians, who continue to follow the tradition of Jerusalem by observing the Nativity on January 6 and the Annunciation nine months earlier. In the course of the later fourth and fifth centuries other Eastern churches adopted the Roman festival of December 25, thenceforward devoting January 6 only to the celebration of Christ's baptism. In that same period the January festival was adopted at Rome, and its nativity theme was narrowed to the visit of the Magi, from which it came to be considered the manifestation of Christ to the Gentiles.

In most Latin cultures, the Epiphany festival remains the occasion for the exchange of gifts, after the example ofPage 1744 | Top of Article the Magi, while in northern Europe and English-speaking countries that custom, continued from pre-Christian year-end festivities, attaches rather to Christmas. In the Byzantine and other Eastern churches where Epiphany celebrates Christ's sanctification of water by his baptism, a major feature of the celebration is a blessing of water that is drawn by the faithful and carried to their homes, a custom for which pre-Christian roots are also claimed in modern scholarship.

Analogous to the period of preparation for Easter, a fast before the nativity developed in the West into a preparatory season. In addition to the Roman December Embertide, churches in Gaul observed fasts of six weeks or more; a common form was called Saint Martin's Lent, from its beginning on November 11, the Feast of Saint Martin of Tours. That season, known as Advent, developed themes associated both with the advent of Christ at his nativity and the second advent at the end of this world's history, the two advents having been expressed by the same term (parousia) since the Greek theologians of the second century. A forty-day fast is also kept before Christmas in the Eastern churches, but this never received the liturgical articulation of Advent in the West, where Advent today comprises the four weeks (or, in Milan, six weeks) before Christmas.