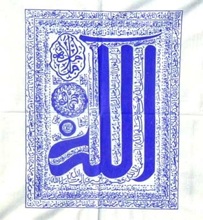 Allah (Arabic: الله‎, Allāh, is the standard Arabic word for God.[1] While the term is best known in the West for its use by Muslims as a reference to God, it is used by Arabic-speakers of all Abrahamic faiths, including Christians and Jews, in reference to "God".[1][2][3] The term was also used by pagan Meccans as a reference to the creator-god, possibly the supreme deity in pre-Islamic Arabia.[4]

The concepts associated with the term Allah (as a deity) differ among the traditions. In pre-Islamic Arabia amongst pagan Arabs, Allah was not considered the sole divinity, having associates and companions, sons and daughters - a concept which Islam thoroughly and resolutely abrogated. In Islam, the name Allah is the supreme and all-comprehensive divine name. All other divine names are believed to refer back to Allah.[5] Allah is unique, the only Deity, creator of the universe and omnipotent.[1][2]

Arab Christians today use terms such as Allāh al-ʼAb ( الله الأب, "God the Father") to distinguish their usage from Muslim usage.[6] There are both similarities and differences between the concept of God as portrayed in the Qur'an and the Hebrew Bible.[7] Unicode has a codepoint reserved for Allāh, ﷲ = U+FDF2.[8] Many Arabic type fonts feature special ligatures for Allah.[9]

The word Allāh is always written without an alif to spell the ā vowel. This is because the spelling was settled before Arabic spelling started habitually using alif to spell ā. However, in vocalized spelling, a small diacritic alif is added on top of the shaddah to indicate the pronunciation. One exception may be in the pre-Islamic Zabad inscription,[31] where it ends with an ambiguous sign that may be a lone-standing h with a lengthened start, or may be a non-standard conjoined l-h:- الاه : This reading would be Allāh spelled phonetically with alif for the ā. الاله : This reading would be Al-ʼilāh = "the god" (an older form, without contraction), by older spelling practice without alif for ā.

The term Allāh is derived from a contraction of the Arabic definite article al- "the" and ʼilāh "deity, god" to al-lāh meaning "the [sole] deity, God" (ho theos monos).[4] Cognates of the name "Allāh" exist in other Semitic languages, including Hebrew and Aramaic.[3] The corresponding Aramaic form is אֱלָהָא ʼĔlāhā in Biblical Aramaic and ܐܰܠܳܗܳܐ ʼAlâhâ or ʼĀlōho in Syriac.[10]

Allah was not considered the sole divinity; however, Allah was considered the creator of the world and the giver of rain. The notion of the term may have been vague in the Meccan religion.[4] Allah was associated with companions, whom pre-Islamic Arabs considered as subordinate deities. Meccans held that a kind of kinship existed between Allah and the jinn.[13] Allah was thought to have had sons[14] and that the local deities of al-ʻUzzá, Manāt and al-Lāt were His daughters.[15] The Meccans possibly associated angels with Allah.[16][17] Allah was invoked in times of distress.[17][18] Muhammad's father's name was ‘Abdallāh meaning the “servant of Allāh.” or "the slave of Allāh"[17]

According to Islamic belief, Allah is the proper name of God,[11] and humble submission to His Will, Divine Ordinances and Commandments is the pivot of the Muslim faith.[1] "He is the only God, creator of the universe, and the judge of humankind."[1][2] "He is unique (wahid) and inherently one (ahad), all-merciful and omnipotent."[1] The Qur'an declares "the reality of Allah, His inaccessible mystery, His various names, and His actions on behalf of His creatures."[1]

In Islamic tradition, there are 99 Names of God (al-asma al-husna lit. meaning: "The best names") each of which evoke a distinct characteristic of Allah.[2][19] All these names refer to Allah, the supreme and all-comprehensive divine name.[5] Among the 99 names of God, the most famous and most frequent of these names are "the Merciful" (al-rahman) and "the Compassionate" (al-rahim).[2][19]

Most Muslims use the untranslated Arabic phrase "insha' Allah" (meaning "God willing") after references to future events.[20] Muslim discursive piety encourages beginning things with the invocation of "bismillah"(meaning "In the name of God").[21]

There are certain phrases in praise of God that are favored by Muslims, including "Subhan-Allah" (Holiness be to God), "Alhamdulillah" (Praise be to God), "La-il-la-ha-illa-Allah" (There is no deity but God) and "Allāhu Akbar" (God is great) as a devotional exercise of remembering God (zikr).[22] In a Sufi practice known as zikr Allah (lit. remembrance of God), the Sufi repeats and contemplates on the name Allah or other divine names while controlling his or her breath.[23]

Arabic-speakers of all Abrahamic faiths, including Christians and Jews, use the word "Allah" to mean "God".[3] The Christian Arabs of today have no other word for 'God' than 'Allah'.[6] (Even the Arabic-descended Maltese language of Malta, whose population is almost entirely Roman Catholic, uses Alla for 'God'.) Arab Christians for example use terms Allāh al-ʼab (الله الأب) meaning God the father, Allāh al-ibn (الله الابن) mean God the Son, and Allāh al-rūḥ al-quds (الله الروح القدس) meaning God the Holy Spirit.

Arab Christians have used two forms of invocations that were affixed to the beginning of their written works. They adopted the Muslim basm-allah, and also created their own Trinitized basm-allah as early as the eight century CE.[24] The Muslim basm-allah reads: "In the name of God, the Compassionate, the Merciful." The Trinitized basm-allah reads: "In the name of Father and the Son and the Holy Spirit, One God." The Syriac, Latin and Greek invocations do not have the words "One God" at the end. This addition was made to emphasize the monotheistic aspect of Trinitian belief and also to make it more palatable to Muslims.[24] According to Marshall Hodgson, it seems that in the pre-Islamic times, some Arab Christians made pilgrimage to the Kaaba, a pagan temple at that time, honoring Allah there as God the Creator.[25]