From Nordan Symposia
(Redirected from Allegorical)
Jump to navigationJump to search 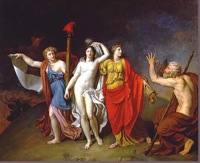 Allegory (from Greek: αλλος, allos, "other", and αγορευειν, agoreuein, "to speak in public") is a figurative mode of representation conveying a meaning other than the literal. Allegory teaches a lesson through symbolism. Allegory communicates its message by means of symbolic figures, actions or symbolic representation. Allegory is generally treated as a figure of rhetoric, but an allegory does not have to be expressed in language: it may be addressed to the eye, and is often found in realistic painting, sculpture or some other form of mimetic, or representative art.

Simply put, an allegory is a device that can be presented in literary form, such as a poem or novel, or in visual form, such as in painting or sculpture. As a literary device, an allegory in its most general sense is an extended metaphor. As an artistic device, an allegory is a visual symbolic representation. An example of a simple visual allegory is the image of the grim reaper. Viewers understand that the image of the grim reaper is a symbolic representation of death. Nevertheless, images and fictions with several possible interpretations are not allegories in the true sense. Furthermore, not every fiction with general application is an allegory.

The etymological meaning of the word is broader than the common use of the word. Though it is similar to other rhetorical comparisons, an allegory is sustained longer and more fully in its details than a metaphor, and appeals to imagination, while an analogy appeals to reason or logic. The fable or parable is a short allegory with one definite moral.

Northrop Frye discussed what he termed a "continuum of allegory", ranging from what he termed the "naive allegory" of The Faerie Queene, to the more private allegories of modern paradox literature. In this perspective, the characters in a "naive" allegory are not fully three-dimensional, for each aspect of their individual personalities and the events that befall them embodies some moral quality or other abstraction; the allegory has been selected first, and the details merely flesh it out.[1]