Alpha and the Omega 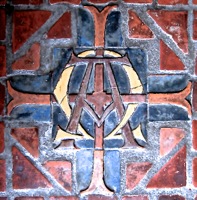 Alpha and Omega (alpha (Α or α) and omega (Ω or ω)), are the first and the last letters of the Greek alphabet and are an appellation of Christ or of God in the Book of Revelation. These couple of letters are used as Christian symbols, and are often combined with the Cross, Chi-rho, or other Christian symbols.

This symbol was suggested by the Apocalypse, where many believe that Christ, as well as the Father, is "the First and the Last" (ii, 8); "the Alpha and Omega, the first and the last, the beginning and the end" (cf., xxii, 13; i, 8). Clement of Alexandria (2nd century, philosopher and commentator on pagan and Christian information) speaks of the Word as "the Alpha and the Omega of Whom alone the end becomes beginning, and ends again at the original beginning without any break" (Stromata, IV, 25). Tertullian (lawyer, theologian) also alludes to Christ as the Alpha and Omega (De Monogamiâ, v), and from Prudentius (Cathemer., ix, 10) we learn that in the fourth century the interpretation of the apocalyptic letters was still the same: "Alpha et Omega cognominatus, ipse fons et clausula, Omnium quae sunt, fuerunt, quaeque post futura sunt." It was, however, in the monuments of early Christianity that the symbolic Alpha and Omega had their greatest vogue.

This phrase is interpreted by many Christians to mean that Jesus has existed for all eternity. The phrase "alpha and omega" may signify that God is eternal. The symbols were used in early Christianity and appear in the Roman catacombs.[1]