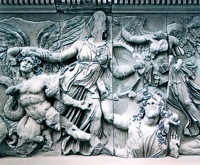 For lessons on the topic of Altars, follow this link.

An altar is any structure upon which offerings such as sacrifices and votive offerings are made for religious purposes, or some other sacred place where ceremonies take place. Altars are usually found at shrines, and they can be located in temples, churches and other places of worship. Today they are used particularly in the religions of Buddhism, Hinduism, Shinto, Taoism, as well as Christianity, LaVeyan Satanism, Thelema, Neopaganism, and in Ceremonial magic. Many historical faiths also made use of them, including Greek and Norse religion.[1]