From Nordan Symposia
(Redirected from American)
Jump to navigationJump to search 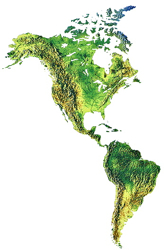 America, the name of a land mass of the Western hemisphere, consisting of the two continents of North and South America, joined by the Isthmus of Panama; freq. used also as the name of the United States of America; app. first used in M. Waldseemüller Cosmographiae Introductio (1507) < Americus, Latinized form of the name of Amerigo Vespucci (1451-1512), Italian explorer who navigated the coast of South America in 1501.]

A place which one longs to reach; an ultimate or idealized destination or aim; an (esp. newly identified) object of personal ambition or desire. Usu. with preceding possessive pronoun.

1901 ‘L. MALET’ Hist. R. Calmady II. i. 90 That America of his childish dreams... the Long Gallery. 1922 J. JOYCE Ulysses II. 402 Thou sawest thy America, thy lifetask, and didst charge to cover like the transpontine bison. 1944 M. RUKEYSER Ninth Elegy in Coll. Poems (1978) 259 We want to find and will spend our lives in finding: The landfall of our broken voyages Is still our America of contradictions. 1983 J. JONES Dostoevsky vii. 279 Whether the suicide who teases the murderer about his ability to do something is himself achieving anything deedy by going to his America{em}that question Crime and Punishment never voices.