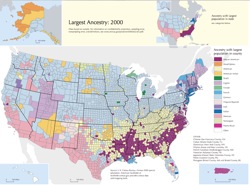 In 1507, German cartographer Martin Waldseemüller produced a world map on which he named the lands of the Western Hemisphere "America" after Italian explorer and cartographer Amerigo Vespucci.

The first documentary evidence of the phrase "United States of America" was in an anonymously written essay published in The Virginia Gazette newspaper in Williamsburg, Virginia on April 6, 1776. In June 1776, Thomas Jefferson included the phrase "UNITED STATES OF AMERICA" in all capitalized letters in the headline of his "original Rough draught" of the Declaration of Independence. In the final Fourth of July version of the Declaration, the pertinent section of the title was changed to read, "The unanimous Declaration of the thirteen united States of America".

In 1777 the Articles of Confederation announced, "The Stile of this Confederacy shall be 'The United States of America'".

The short form "United States" is also standard. Other common forms include the "U.S.", the "USA", and "America". Colloquial names include the "U.S. of A." and, internationally, the "States". "Columbia", a name popular in poetry and songs of the late 1700s,[35] derives its origin from Christopher Columbus; it appears in the name "District of Columbia".

In non-English languages, the name is frequently translated as the translation of either the "United States" or "United States of America", and colloquially as "America". In addition, an initialism is sometimes used

For lessons on the topic of the United States, follow this link.

The United States of America (USA or U.S.A.), commonly called the United States (US or U.S.) and America, is a federal republic consisting of fifty states and a federal district. The 48 contiguous states and the federal district of Washington, D.C. are in central North America between Canada and Mexico. The state of Alaska is the northwestern part of North America, west of Canada and east of Russia which is across the Bering Strait in Asia, and the state of Hawaii is an archipelago in the mid-North Pacific. The country also has five populated and nine unpopulated territories in the Pacific and the Caribbean.

At 3.79 million square miles (9.83 million km2) in total and with around 315 million people, the United States is the third largest country by land area and population. It is one of the world's most ethnically diverse and multicultural nations, the product of large-scale immigration from many countries. The geography and climate of the U.S. is also extremely diverse, with deserts, plains, forests, and mountains that are also home to a wide variety of wildlife.

Paleo-indians migrated from Asia to what is now the United States mainland around 12,000 years ago. European colonization began around 1600 and came mostly from England. The United States emerged from thirteen British colonies located along the Atlantic seaboard. Disputes between Great Britain and the American colonies led to the American Revolution. On July 4, 1776, delegates from the thirteen colonies unanimously issued the Declaration of Independence, which established the United States of America. The American Revolutionary War, which ended with the recognition of independence of the United States from the Kingdom of Great Britain, was the first successful war of independence against a European colonial empire.[13][14] The current Constitution was adopted on September 17, 1787; 27 Amendments have since been added to the Constitution. The first ten amendments, collectively named the Bill of Rights, were ratified in 1791 and guarantee many fundamental civil rights and freedoms.

The United States is a developed country and has the world's largest national economy, with an estimated 2012 GDP of $15.6 trillion – 19% of global GDP at purchasing-power parity, as of 2011. The per capita GDP of the U.S. was the world's sixth-highest as of 2010, although America's income inequality was also ranked highest among OECD countries by the World Bank. The economy is fueled by an abundance of natural resources, a well-developed infrastructure, and high productivity; and while its economy is considered post-industrial it continues to be one of the world's largest manufacturers. The country accounts for 39% of global military spending, being the foremost economic and military power, a prominent political and cultural force in the world, and a leader in scientific research and technological innovation.

Peace will not come to Urantia until every so-called sovereign nation surrenders its power to make war into the hands of a representative government of all mankind. Political sovereignty is innate with the peoples of the world. When all the peoples of Urantia create a world government, they have the right and the power to make such a government SOVEREIGN; and when such a representative or democratic world power controls the world's land, air, and naval forces, peace on earth and good will among men can prevail—but not until then.

To use an important illustration: The states of the American Federal Union have long enjoyed peace. They have no more wars among themselves. They have surrendered their sovereignty to the federal government, and through the arbitrament of war, they have abandoned all claims to the delusions of self-determination. While each state regulates its internal affairs, it is not concerned with foreign relations, tariffs, immigration, military affairs, or interstate commerce. Neither do the individual states concern themselves with matters of citizenship. These states suffer the ravages of war only when the federal government's sovereignty is in some way jeopardized.

These states, having abandoned the twin sophistries of sovereignty and self-determination, enjoy interstate peace and tranquillity. So will the nations of Urantia begin to enjoy peace when they freely surrender their respective sovereignties into the hands of a global government—the sovereignty of the brotherhood of men. In this world state the small nations will be as powerful as the great, even as the small state of Rhode Island has its two senators in the American Congress just the same as the populous state of (state) New York or the large state of Texas.[1]