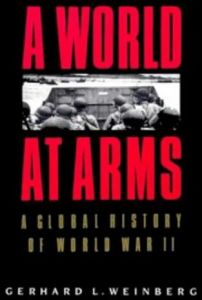 World War II, or the Second World War (Official military histories in Commonwealth nations refer to the conflict as the Second World War, while the United States' official histories refer to the conflict as World War II. English translations of the official histories of other nations also tend to resolve into English as Second World War, for example Zweiter Weltkrieg in German. Non-English-language use typically translates to Second World War, for instance the Spanish Segunda Guerra mundial and the French Seconde Guerre mondiale. "Official" usage of these terms is giving way to popular usage and the two terms are becoming interchangeable even in formal military history. (often abbreviated WWII or WW2), was a global military conflict which involved a majority of the world's nations, including all of the great powers, organised into two opposing military alliances: the Allies and the Axis. The war involved the mobilisation of over 100 million military personnel, making it the most widespread war in history. In a state of "total war", the major participants placed their complete economic, industrial, and scientific capabilities at the service of the war effort, erasing the distinction between civilian and military resources. Over seventy million people, the majority of them civilians, were killed, making it the deadliest conflict in human history.(Dirty Little Secrets of World War II: Military Information No One Told You About the Greatest, Most Terrible War in History, William Morrow & Company, 1994. ISBN 0-688-12235-3)

The start of the war is generally held to be in September 1939 with the German invasion of Poland and subsequent declarations of war on Nazi Germany by the British Commonwealth and France. Many belligerents entered the war before or after this date, during a period which spanned from 1937 to 1941, as a result of other events. Amongst these main events are the Marco Polo Bridge Incident (fought between Nationalist China and Japan), the start of Operation Barbarossa (the Nazi invasion of Russia), and the attacks on Pearl Harbor and British and Dutch colonies in South East Asia.

The Soviet Union and the United States emerged from the war as the world's 'superpowers'. This set the stage for the Cold War, which lasted for the next 45 years. The United Nations was formed in the hope of preventing another such conflict. The self-determination spawned by the war accelerated decolonisation movements in Asia and Africa, while Western Europe itself began moving toward integration.[1]