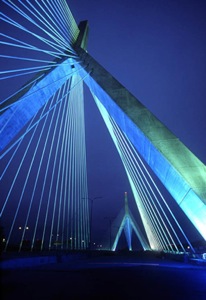 The word infrastructure according to Etymology Online has been used in English since at least 1927 and meant: The installations that form the basis for any operation or system. The Oxford English Dictionary traces the word's origins to earlier usage, originally applied in a military sense.

For lessons on the topic of Infrastructure, follow this link.

The word was imported from French, where it means subgrade, the native material underneath a constructed pavement or railway. The word is a combination of the Latin prefix "infra", meaning "below" and "structure". The military sense of the word was probably first used in France, and imported into English around the time of the First World War. The military use of the term achieved currency in the United States after the formation of NATO in the 1940s, and was then adopted by urban planners in its modern civilian sense by 1970. [6], .

The term came to prominence in the United States in the 1980s following the publication of America in RuinsISBN 0822305542 (Choate and Walter, 1981)[1] , which initiated a public-policy discussion of the nation’s "infrastructure crisis", purported to be caused by decades of inadequate investment and poor maintenance of public works.