From Nordan Symposia
(Redirected from Mountains)
Jump to navigationJump to search 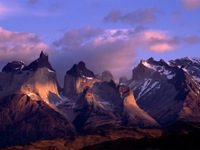 Middle English, from Anglo-French muntaine, from Vulgar Latin montanea, from feminine of montaneus of a mountain, alteration of Latin montanus, from mont-, mons

b : an elongated ridge

b : a vast number or quantity

A mountain is a large landform that stretches above the surrounding land in a limited area usually in the form of a peak. A mountain is generally steeper than a hill. The adjective montane is used to describe mountainous areas and things associated with them. The study of mountains is called Orography.

Exogeology deals with planetary mountains, which in that branch of science are usually called montes (singular—mons). The highest mountain on earth is the Mount Everest 8,848 m (29,029 ft).. The highest known mountain in the Solar System is Olympus Mons on the planet Mars at 21,171 m (69,459 ft).

There is no universally accepted definition of a mountain. Elevation, volume, relief, steepness, spacing and continuity has been used as criteria for defining a mountain. In the Oxford English Dictionary a mountain is defined as "a natural elevation of the earth surface rising more or less abruptly from the surrounding level and attaining an altitude which, relatively to the adjacent elevation, is impressive or notable."

Whether a landform is called a mountain may depend on usage among the local people. The highest point in San Francisco, California, is called Mount Davidson, notwithstanding its height of 990 feet, which makes it ten feet short of the minimum for a mountain in American appellation. Similarly, Mount Scott outside Lawton, Oklahoma is only 824 feet from its base to its highest point.

Definitions of "mountain" include:

By this definition, mountains cover 64% of Asia, 25% of Europe, 22% of South America, 17% of Australia, and 3% of Africa. As a whole, 24% of the Earth's land mass is mountainous and 10% of people live in mountainous regions. Most of the world's rivers are fed from mountain sources, and more than half of humanity depends on mountains for water.[1]