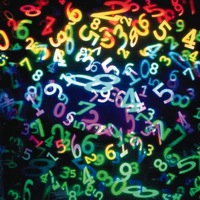 A number is a mathematical object used in counting and measuring. A notational symbol which represents a number is called a numeral, but in common usage the word number is used for both the abstract object and the symbol, as well as for the word for the number. In addition to their use in counting and measuring, numerals are often used for labels (telephone numbers), for ordering (serial numbers), and for codes (ISBNs). In mathematics, the definition of number has been extended over the years to include such numbers as 0, negative numbers, rational numbers, irrational numbers, and complex numbers.

For lessons on the topic of Numbers, follow this link.

• ( numbers) dated arithmetic : the boy was adept at numbers.

• ( a number of) several : we have discussed the matter on a number of occasions. • a group or company of people : there were some distinguished names among our number. • ( numbers) a large quantity or amount, often in contrast to a smaller one; numerical preponderance : the weight of numbers turned the battle against them.

• a song, dance, piece of music, etc., esp. one of several in a performance : they go from one melodious number to another. • [usu. with adj. ] informal a thing, typically an item of clothing, of a particular type, regarded with approval or admiration : Yvonne was wearing a little black number.

• a particular form so classified.

• include or classify as a member of a group : the orchestra numbers Brahms among its past conductors.

• count : strategies like ours can be numbered on the fingers of one hand. • assess or estimate the size or quantity of (something) to be a specified figure : he numbers the fleet at a thousand.