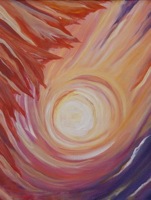 The word is known in English since c. 1303, deriving from Old French enoint "smeared on", pp. of enoindre "smear on", itself from Latin inunguere, from in- "on" + unguere "to smear." Originally it only referred to grease or oil smeared on for medicinal purposes; its use in the Coverdale Bible in reference to Christ (cf. The Lord's Anointed, see Chrism) has spiritualized the sense of it, a sense expanded and expounded upon by St Paul's writings in his "Epistles". The title Christ is derived from the Hebrew Messiah and means literally; covered in oil, anointed.

b : to choose by or as if by divine election; also : to designate as if by a ritual anointment <critics anointed the author as the bright new talent>

To anoint is to pour or smear with perfumed oil, milk, water, melted butter or other substances, a process employed ritually by many religions. People and things are anointed to symbolize the introduction of a sacramental or divine influence, a holy emanation, spirit, power or god. It can also be seen as a spiritual mode of ridding persons and things of dangerous influences, as of demons (Persian drug, Greek κηρες Keres, Armenian dev) believed to be or to cause disease. [1]