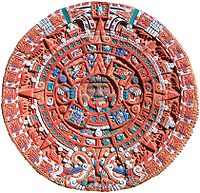 Aztec is a term used to refer to certain ethnic groups of central Mexico, particularly those groups who spoke the Nahuatl language and who achieved political and military dominance over large parts of Mesoamerica in the 14th, 15th and 16th centuries, a period referred to as the Late post-Classic period in Mesoamerican chronology.

Often the term "Aztec" refers exclusively to the people of Tenochtitlan, situated on an island in Lake Texcoco, who called themselves Mexica Tenochca or Colhua-Mexica

Sometimes it also includes the inhabitants of Tenochtitlan's two principal allied city-states, the Acolhuas of Texcoco and the Tepanecs of Tlacopan, who together with the Mexica formed the Aztec Triple Alliance which has also become known as the "Aztec Empire". In other contexts it may refer to all the various city states and their peoples, who shared large parts of their ethnic history as well as many important cultural traits with the Mexica, Acolhua and Tepanecs, and who like them, also spoke the Nahuatl language. In this meaning it is possible to talk about an Aztec civilization including all the particular cultural patterns common for the Nahuatl speaking peoples of the late postclassic period in Mesoamerica.

From the 12th century Valley of Mexico was the nucleus of Aztec civilization: here the capital of the Aztec Triple Alliance, the city of Tenochtitlan, was built upon raised islets in Lake Texcoco. The Triple Alliance formed its tributary empire expanding its political hegemony far beyond the Valley of Mexico, conquering other city states throughout Mesoamerica.

At its pinnacle Aztec culture had rich and complex mythological and religious traditions, as well as reaching remarkable architectural and artistic accomplishments. A particularly striking element of Aztec culture to many was the practice of human sacrifice.

In 1521, in what is probably the most widely known episode in the Spanish colonization of the Americas, Hernán Cortés, along with a large number of Nahuatl speaking indigenous allies, conquered Tenochtitlan and defeated the Aztec Triple Alliance under the leadership of Hueyi Tlatoani Moctezuma II; In the series of events often referred to as "The Fall of the Aztec Empire". Subsequently the Spanish founded the new settlement of Mexico City on the site of the ruined Aztec capital.

According to the mythico-historical Aubin codex, seven Nahua tribes lived in Aztlán under the rule of a powerful elite. The seven tribes fled Aztlán, to seek new lands. The Mexicas were the last group to leave. The Aubin Codex relates that after leaving Aztlán, their god Huitzilopochtli ordered his people to never identify themselves as Azteca, the name of their former masters. Instead they should henceforth call themselves Mexìcâ.

The word "Aztec" was not originally an endonym for any ethnic group, but achieved wide use as an exonym first in the English language and later in Spanish from the 19th century on. Some modern day scholars use the word "Aztec" to refer to the Nahuatl speaking peoples of Mexico before the Spanish conquest in 1519 and the word "Nahua" to refer to the same peoples after the conquest. Because no people ever referred to itself as "Aztecs", and because the peoples to whom the word is popularly used to refer never saw themselves as a unified ethnic group, many scholars now prefer to refer to particular ethnic groups individually e.g. the "Mexica", "Acolhua" or "Tepaneca" rather than subsuming them under a single term such as "Aztec".

The Spanish conquistadores referred to them as "Mexicas" or "Culua-Mexicas". In Mexico, archaeologists and museums use the term Mexicas. The wider population in and outside Mexico generally speaks of Aztecs. In this article, the term "Mexica" is used to refer to the Mexica people up until the time of the formation of the Aztec Triple Alliance. After this, the term "Aztecs" is used to refer to the three peoples who made up the Triple Alliance, or in the wider context to all the Nahuatl speaking peoples as bearers of "Aztec culture".[1]