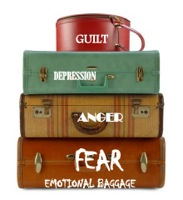 According to the Oxford English Dictionary, the word luggage enters printed English in 1596. The word derived from the verb "lug," as in "that which needs to be lugged about." The idea of pulling things inherent in the verb lug combines with the suffix -age to create the word we know today.

Baggage is any number of bags, cases and containers which hold a traveler's articles during transit.

Luggage is more or less the same concept as "baggage", but is normally used in relation to the personal baggage of a specific person or persons (e.g. I have lost my luggage, he has prepared his luggage, but not normally I have lost my baggage, he has prepared his baggage). The modern traveler can be expected to have packages containing clothing, toiletries, small possessions, trip necessities, and on the return-trip, souvenirs. For some, luggage and the style thereof is representative of the owner's wealth.

Baggage (not luggage), or baggage train, can also refer to the train of people and goods, both military and of a personal nature, which commonly followed pre-modern armies on campaign.[1]