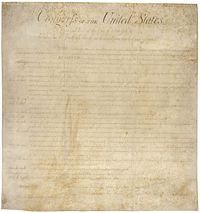 A Bill of Rights is a list or summary of rights that are considered important and essential by a group of people. The purpose of these bills is to protect those rights against infringement by the government and others. The term "bill of rights" originates from Britain, and it refers to the fact that the English Bill of Rights was literally a bill which is a proposed law, that was passed by Parliament in 1689. Bills of rights require proper enforcement and support in order to be effective and actually protect the rights enumerated in them, which means that effectively, they are really only bills of temporary privileges.

In other jurisdictions, the definition of rights may be statutory. In other words, it may be repealed just like any other law, and does not necessarily have greater weight than other laws. Not every jurisdiction enforces the protection of the rights articulated in its bill of rights.

[ustralia is the only Western country without a constitutional or legislative bill of rights, although debate for the creation of such a bill is ongoing in many states. [1]