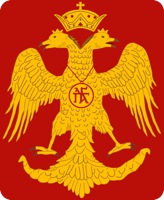 The separation of Byzantine history into periods, like any historical periodization, is one artificially imposed by scholars. The most broadly used periodization is the tripartite division into early, middle, and late periods. This system has, however, two substantial shortcomings: first of all, it is based not on actual historical developments, but on the dubious philosophical premise that three is a magical figure; second, there is no common consensus concerning the borderlines between particular periods. The conventional system of periodization places the beginning of Byz. history either in the early 4th C. with the foundation of Constantinople by Constantine I the Great or at the end of that century with the division of the empire into Eastern and Western halves under the sons of Theodosios I, Arkadios and Honorius. There is much less agreement about what marks the end of the “early Byzantine” period (and, accordingly, the beginning of the “middle Byzantine” period); it has been variously dated to 565 (death of Justinian I), 610 (accession of Herakleios), 717 (beginning of the Isaurian dynasty), and 843 (defeat of Iconoclasm and the Triumph of Orthodoxy). For the end of the middle Byzantine period scholars have usually chosen either 1071 (battle of Mantzikert) or 1204 (capture of Constantinople by the Latins). The “late Byzantine” period is traditionally dated from 1204 (or 1261, the recovery of Constantinople by the Byz.) to 1453, when Constantinople fell to the Turks.

Named “Protobyzantine” by Lemerle (Agr.Hist. 1–26). The application of the term “Byzantine” to this period is debatable, since the empire of this time preserved the main features of ancient urban society and remained a Mediterranean state par excellence. The issue is further confused by the fact that some scholars refer to papyri of the 6th and 7th C. as “late Byzantine,” and that likewise the final period of Byz. rule in Syria and Palestine (6th–7th C.) may be termed “late Byzantine.”

This period is characterized by the crisis of ancient city life, aggravated by serious territorial losses and cultural decline. Sometimes it is called the “period of Iconoclasm,” even though the two phenomena do not fully coincide chronologically; moreover, the concept of Iconoclasm does not cover all the changes that Byz. society underwent during this time. No more fortunate is the attempt to describe this period as one of Slavic penetration into the empire, which allegedly caused an essential restructuring of the Byz. economy and administration. In the first half of the 9th C. occurred the first stages of the process of recovery and consolidation that was to characterize the next period.

Sometimes called the period of the “Macedonian renaissance” or of encyclopedism. The latter term is more appropriate, although it refers only to cultural developments. During this period the “classic” form of the Byz. centralized and “totalitarian” state was established, and ideological and cultural uniformity was superimposed upon society. At the end of this period Byz. launched a series of offensive wars and managed to recover some of its territory in the east and the Balkans.

This period is divided into two unequal parts by the fall of Constantinople to the Fourth Crusade in 1204. Characteristic traits of this period are the rise of provincial towns and of a semifeudal nobility, developments that were accompanied by a cultural flowering that is here called “pre-Renaissance” (the traditional term is “Komnenian renaissance”). Byz. took substantial steps toward “westernizing” its economy, social structure, and government, and despite religious friction was close to becoming a member of the European community of feudal states. The catastrophe of 1204 seems to have had no radical impact on the economic and social development of Byz.; the political pattern changed, however, and the centralized empire was replaced by a group of independent entities (the empires of Nicaea and Trebizond, the despotate of Epiros, the Latin Empire with its vassal states).

Under the Palaiologan dynasty Byz. was a minor state whose territory continued to shrink under the blows inflicted by the Latins (esp. the Catalan Grand Company), Serbs, and Ottomans. The desperate situation was aggravated by socioeconomic factors—the growth of semifeudal forces, the increasing urbanization of western Europe, and the growing economic dependence of Byz. on the Italian republics of Venice, Genoa, and Pisa. The Byz. retained nevertheless the illusion of being a universal empire, while in the West national states were emerging as the dominant political form. The government and esp. the church could not reconcile their universal claims with the political realities. Byz. was unable to normalize relations with either the Turks or the West, nor could it unite the divided powers of eastern Europe to resist the Turkish onslaught.

How to cite this entry: Byzantium, History of The Oxford Dictionary of Byzantium. Ed. Alexander P. Kazhdan. Oxford University Press 1991.