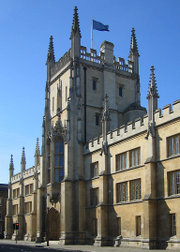 The original headquarters of the Cambridge University Press, in Trumpington Street, Cambridge, UK.

Cambridge University Press (known colloquially as CUP) is a publisher given a Royal Charter by Henry VIII in 1534, and one of the two privileged presses (the other being Oxford University Press). It published its first book in 1584, and has published at least one book every year since then, making it the oldest publishing and printing house in the world. It is both an academic and educational publishing house, a printing factory, and the printer for official documents for the University of Cambridge. Authors published by Cambridge have included John Milton, William Harvey, Isaac Newton, and Stephen Hawking. CUP was first exempted from UK Corporation Tax in 1976 For history, see [1].

The Press is now a global organisation with a regional structure operating in the Americas, in United Kingdom, Europe, Middle-East, Africa, and in Asia-Pacific. Headquartered in Cambridge UK, the company has warehousing centres in Cambridge, New York, Melbourne, Madrid], Cape Town, São Paulo and Singapore, with offices and agents in many other countries. Its publishing output includes major ELT courses; tertiary textbooks and monographs; scientific and medical reference; professional lists in law, management and engineering; educational coursebooks; and e-learning materials for schools via the Cambridge-Hitachi joint venture. Its publications are aimed at markets worldwide, at all levels from primary school to postgraduate and professional. The Press also publishes Bibles, prayer books, and some 200 academic journals. It has 25,000 authors in 116 countries and issues between 1,500 and 2,000 new titles a year.