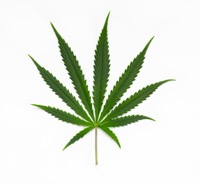 1798, "common hemp," from Cannabis, Modern Latin plant genus named (1728), from Greek kannabis "hemp," a Scythian or Thracian word. Also source of Armenian kanap', Albanian kanep, Russian konoplja, Persian kanab, Lithuanian kanapes "hemp," and English canvas and possibly hemp. In reference to use of the plant parts as an intoxicant, from 1848.

For lessons on the topic of Cannabis, follow this link.

Cannabis (/ˈkænəbɪs/) is a genus of flowering plant that includes three species (and seven taxa) or subspecies, sativa, indica, and ruderalis. The plant is indigenous to central Asia and the Indian subcontinent.

Cannabis has long been used for hemp fibre, for hemp oils, for medicinal purposes, and as a recreational drug. Industrial hemp products are made from cannabis plants selected to produce an abundance of fiber. To satisfy the UN Narcotics Convention, some cannabis strains have been bred to produce minimal levels of tetrahydrocannabinol (THC), the principal psychoactive constituent. Many plants have been selectively bred to produce a maximum of THC (cannabinoids), which is obtained by curing the flowers. Various compounds, including hashish and hash oil, are extracted from the plant.

Cannabis sativa appears naturally in many tropical and humid parts of the world. Its use as a mind-altering drug has been documented by archaeological finds in prehistoric societies in Euro-Asia and Africa.

"The Scythians, as I said, take some of this hemp-seed [presumably, flowers], and, creeping under the felt coverings, throw it upon the red-hot stones; immediately it smokes, and gives out such a vapour as no Grecian vapour-bath can exceed; the Scyths, delighted, shout for joy."

Classical Greeks and Romans were using cannabis, while in the Middle East, use spread throughout the Islamic empire to North Africa. In 1545 cannabis spread to the western hemisphere where Spaniards imported it to Chile for its use as fiber. In North America cannabis, in the form of hemp, was grown for use in rope, clothing and paper.