Center for Astrophysics and Space Astronomy 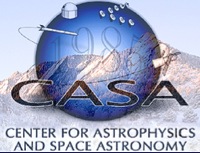 The Center for Astrophysics and Space Astronomy (CASA), an astronomy and astrophysics Center founded in 1985, is an affiliated unit within the structure of theAstrophysical and Planetary Sciences (APS) Department at the University of Colorado, Boulder. Other affiliated units at the University of Colorado are the Joint Institute for Laboratory Astrophysics (JILA) and the Laboratory for Atmospheric and Space Physics (LASP). The APS department offers an academic program leading to the PhD degree in a variety of areas of astrophysics and planetary sciences. Students obtain basic theoretical knowledge common to these related fields, before specializing. The department has recently developed a new undergraduate Astronomy degree, with two tracks (General Astronomy and Astrophysics/Physics). We now have 64 declared undergraduate majors. CASA personnel have active research programs funded by NASA and NSF. In Astrophysics, the major topics include: Stars (proto-, hot, cool, and the Sun), Solar Physics, Interstellar and Intergalactic Matter, Extragalactic Astronomy, High-Energy Astrophysics, Origins, and X-ray/UV/IR/sub-mm Instrumentation.

The Far-Ultraviolet Spectrographic Explorer (FUSE) mission was launched in late June 1999. The FUSE spectrograph was designed and built at CASA over a five-year effort. CASA's hardware team developed the Cosmic Origins Spectrograph which was installed in NASA's Hubble Space Telescope in May 2009. The powerful ultraviolet instrument was jointly built with Ball Aerospace and Technologies Corporation in Boulder. In addition, the CASA Astrophysics Research Laboratory (ARL), developed in 1995, supports a variety of suborbital sounding rocket instrument programs, airborne far-IR heterodyne spectrometer development, and sub-mm instrumentation for the South Pole.

The APS department, including CASA, has become a partner in the 3.5-meter Astrophysical Research Consortium (ARC) telescope at Apache Point Observatory in southern New Mexico. CASA recently built a Near Infrared Camera and Fabry-Perot Spectrometer (NIC-FPS) and installed on the telescope in November 2004.

CASA is housed in three different locations. The main location is in the Duane Physics Building on the CU campus with additional offices in the Stadium Building. The Astrophysics Research Lab is located in the CU-Boulder Research Park.

CASA currently has 11 faculty (roster in APS), 4 Research Professors, 24 Research Associates, 20 graduate students, 22 undergraduates, and 13 support staff. CASA is administered by an Executive Committee (EC), chaired by the Director, and assisted by the Associate Director. The EC reports to the Fellows of CASA (senior members of the organization with voting rights on membership and other substantive issues) and to the Members and Associate Members.