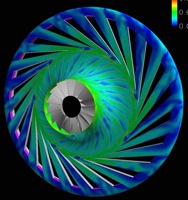 Centripetal force (from Latin centrum "center" and petere "to seek") is a force that makes a body follow a curved path: its direction is always orthogonal to the velocity of the body, toward the fixed point of the instantaneous center of curvature of the path. Centripetal force is generally the cause of circular motion.

In simple terms, centripetal force is defined as a force which keeps a body moving with a uniform speed along a circular path and is directed along the radius towards the centre. The mathematical description was derived in 1659 by Dutch physicist Christiaan Huygens. Isaac Newton's description was: "A centripetal force is that by which bodies are drawn or impelled, or in any way tend, towards a point as to a centre."[1]