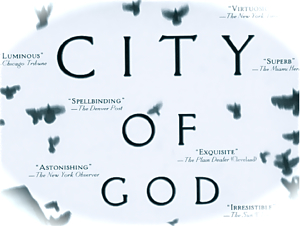 The City of God (De Civitate Dei, also known as De Civitate Dei contra Paganos, "The City of God against the Pagans") is a book written in Latin by Augustine of Hippo in the early 5th century, dealing with issues concerning God, martyrdom, Jews, and other Christian philosophies.

Augustine wrote the treatise to explain Christianity's relationship with competing religions and philosophies, and to the Roman government with which it was increasingly intertwined. It was written soon after Rome was sacked by the Visigoths in 410. This event left Romans in a deep state of shock, and many saw it as punishment for abandoning their Roman religion. It was in this atmosphere that Augustine set out to provide a consolation of Christianity, writing that, even if the earthly rule of the empire was imperilled, it was the City of God that would ultimately triumph - symbolically, Augustine's eyes were fixed on heaven, a theme repeated in many Christian works of Late Antiquity.

Despite Christianity's designation as the official religion of the empire, Augustine declared its message to be spiritual rather than political. Christianity, he argued, should be concerned with the mystical, heavenly city the New Jerusalem - rather than with Earthly politics.

While the book is framed by discussion of these themes, it is largely made up of various digressions on philosophical subjects and presentations of flaws in pagan religions upon which Augustine wished to comment.

Text of The City of God

Texts about The City of God