From Nordan Symposia
(Redirected from Clear)
Jump to navigationJump to search 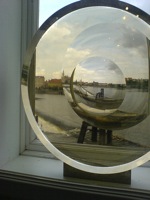 Clarity is the property of being clear or transparent. Clarity can also refer to one's ability to clearly visualize an object or concept, as in thought, understanding, and the "mind's eye", as well as the traditional notion of visual perception, that is, with the actual eyes. Clarity may also refer more broadly to 'perspicacity', the Zen concept of 'no mind', or other terms denoting general clear and unperplexed cognition.

From ME. clarté, a. OF. clarté:L. clritt-em clearness, f. clr-us clear. This early form has been changed in two directions: first by assimilation to clere, cleer, CLEAR, it became clerté, cleerte, CLERETE (cf. surety), which became obs. in 16th c.; secondly under influence of the Lat. original, it became clarité, claritie, clarity (cf. purity, security, etc.); this became almost obs. by 1700, but has been revived by many modern writers, and is now frequent in sense 4.