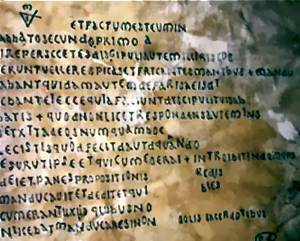 The original manuscript contained spelling errors that were fixed in later versions This recording is by the original broadway cast.

Tonight we will hear an original work by one of our best composers.

The paper contains a number of original ideas about color perception.

This manuscript is the original

Originality is the aspect of created or invented works by as being new or novel, and thus can be distinguished from reproductions, clones, forgeries, or derivative works. An original work is one not received from others nor one copied based on the work of others. The term "originality" is often applied as a compliment to the creativity of artists, writers, and thinkers.

In law, originality has become an important legal concept with respect to intellectual property, where creativity and invention have manifest as copyrightable works.

In the patent law of the United States and most other countries, only original inventions are subject to protection. In addition to being original, inventions submitted for a patent must also be useful and nonobvious.

In United States copyright law and the law of many other states, copyrights protect only original works of authorship, a property which has been historically and legally linked to a concept of "creativity". A work must pass a threshold of originality in order to be copyrightable.

In United Kingdom intellectual property law, a derived work can demonstrate originality, and must do so if it is to respect copyright.

An original idea is an Idea, which one person thought up wholly or partly independently of other people. Original ideas vary from brilliantly intelligent Innovations through to material likely to interest primarily Psychiatrists.

Sometimes two or more people can come up with the same idea independently.