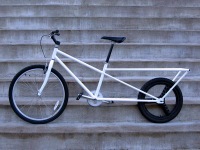 A prototype is an early sample or model built to test a concept or process or to act as a thing to be replicated or learned from. It is a term used in a variety of contexts, including semantics, design, electronics, and software programming. A prototype is designed to test and trial a new design to enhance precision by system analysts and users. Prototyping serves to provide specifications for a real, working system rather than a theoretical one.

In many fields, there is great uncertainty as to whether a new design will actually do what is desired. New designs often have unexpected problems. A prototype is often used as part of the product design process to allow engineers and designers the ability to explore design alternatives, test theories and confirm performance prior to starting production of a new product. Engineers use their experience to tailor the prototype according to the specific unknowns still present in the intended design. For example, some prototypes are used to confirm and verify consumer interest in a proposed design whereas other prototypes will attempt to verify the performance or suitability of a specific design approach.

In general, an iterative series of prototypes will be designed, constructed and tested as the final design emerges and is prepared for production. With rare exceptions, multiple iterations of prototypes are used to progressively refine the design. A common strategy is to design, test, evaluate and then modify the design based on analysis of the prototype.

In many products it is common to assign the prototype iterations Greek letters. For example, a first iteration prototype may be called an "Alpha" prototype. Often this iteration is not expected to perform as intended and some amount of failures or issues are anticipated. Subsequent prototyping iterations (Beta, Gamma, etc.) will be expected to resolve issues and perform closer to the final production intent.

In many product development organizations, prototyping specialists are employed - individuals with specialized skills and training in general fabrication techniques that can help bridge between theoretical designs and the fabrication of prototypes.[1]