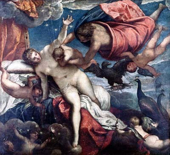 For lessons on the topic of Origin(s), follow this link.

b. More generally: the act or fact of beginning, or of springing from something; beginning of existence with reference to source or cause; rise or first manifestation.

b. Anat. and Zool. A place from which a structure, esp. a muscle or nerve, arises, or at which it is attached; spec. the more fixed of the two points of attachment of a muscle (cf. INSERTION n. 3).

c. Math. A fixed point from which measurement or motion commences; spec. (a) the point of intersection of the axes in Cartesian coordinates; (b) the pole in polar coordinates.

Partial, incomplete, and evolving intellects would be helpless in the master universe, would be unable to form the first rational thought pattern, were it not for the innate ability of all mind, high or low, to form a universe frame in which to think. If mind cannot fathom conclusions, if it cannot penetrate to true origins, then will such mind unfailingly postulate conclusions and invent origins that it may have a means of logical thought within the frame of these mind-created postulates. And while such universe frames for creature thought are indispensable to rational intellectual operations, they are, without exception, erroneous to a greater or lesser degree. [1]