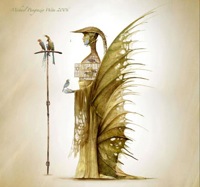 A vast array of accounts attempt to explain the nature of concepts. According to classical accounts, a concept denotes all of the entities, phenomena, and/or relations in a given category or class by using definitions. Concepts are abstract in that they omit the differences of the things in their extension, treating the members of the extension as if they were identical. Classical concepts are universal in that they apply equally to every thing in their extension. Concepts are also the basic elements of propositions, much the same way a word is the basic semantic element of a sentence. Unlike perceptions, which are particular images of individual objects, concepts cannot be visualized. Because they are not themselves individual perceptions, concepts are discursive and result from reason.

For lessons on the related topic of Thought, follow this link.

Concepts are expected to be useful in dealing with reality. Generally speaking, concepts are taken (a) to be acquired dispositions to recognize perceived objects as being of a certain ontological kind, and at the same time (b) to understand what this kind or that kind of object is like, and consequently (c) to perceive a number of perceived particulars as being the same in kind and to discriminate between them and other sensible particulars that are different in kind. In addition, concepts are acquired dispositions to understand what certain kinds of objects are like both (a) when the objects, though perceptible, are not actually perceived, and (b) also when they are not perceptible at all, as is the case with all the conceptual constructs we employ in physics, mathematics, and metaphysics. The impetus to have a theory of concepts that is ontologically useful has been so strong that it has pushed forward accounts that understand a concept to have a deep connection with reality.

On some accounts, there may be agents (perhaps some animals) which don't think about, but rather use relatively basic concepts (such as demonstrative and perceptual concepts for things in their perceptual field), even though it is generally assumed that they do not think in symbols. On other accounts, mastery of symbolic thought (in particular, language) is a prerequisite for conceptual thought.

Concepts are bearers of meaning, as opposed to agents of meaning. A single concept can be expressed by any number of languages. The concept of DOG can be expressed as dog in English, Hund in German, as chien in French, and perro in Spanish. The fact that concepts are in some sense independent of language makes translation possible - words in various languages have identical meaning, because they express one and the same concept.

A term labels or designates concepts. Several partly or fully distinct concepts may share the same term. These different concepts are easily confused by mistakenly being used interchangeably, which is a fallacy. Also, the concepts of term and concept are often confused, although the two are not the same.

The acquisition of concepts is studied in machine learning as supervised classification and unsupervised classification, and in psychology and cognitive science as concept learning and category formation. In the philosophy of Kant, any purely empirical theory dealing with the acquisition of concepts is referred to as a noogony.[1]