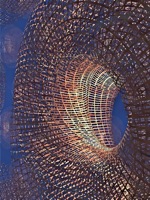 Middle English, from Middle French or Latin; Middle French, from Latin conjectura, from conjectus, past participle of conicere, literally, to throw together, from com- + jacere to throw

b : a conclusion deduced by surmise or guesswork
c : a proposition (as in mathematics) before it has been proved or disproved