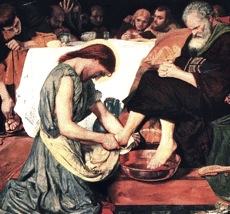 A Creator Son of God became one of you; he is your elder brother in fact; and if in spirit you become truly related brothers of Christ, the victorious Michael, then in spirit must you also be sons of that Father which you have in common--even the Universal Father of all.

More of the character and merciful nature of the Eternal Son of mercy you should comprehend as you meditate on the revelation of these divine attributes which was made in loving service by your own Creator Son, onetime Son of Man on earth, now the exalted sovereign of your local universe--the Son of Man and the Son of God.

The Creator Sons are the makers and rulers of the local universes of time and space. These universe creators and sovereigns are of dual origin, embodying the characteristics of God the Father and God the Son. But each Creator Son is different from every other; each is unique in nature as well as in personality; each is the " only-begotten Son " of the perfect deity ideal of his origin.

For lessons on the topic of Creator Sons, follow this link.

In the vast work of organizing, evolving, and perfecting a local universe, these high Sons always enjoy the sustaining approval of the Universal Father. The relationship of the Creator Sons with their Paradise Father is touching and superlative. No doubt the profound affection of the Deity parents for their divine progeny is the wellspring of that beautiful and well-nigh divine love which even mortal parents bear their children.

These primary Paradise Sons are personalized as Michaels. As they go forth from Paradise to found their universes, they are known as Creator Michaels. When settled in supreme authority, they are called Master Michaels. Sometimes we refer to the sovereign of your universe of Nebadon as Christ Michael. Always and forever do they reign after the " order of Michael, " that being the designation of the first Son of their order and nature.

The original or first-born Michael has never experienced incarnation as a material being, but seven times he passed through the experience of spiritual creature ascent on the seven circuits of Havona, advancing from the outer spheres to the innermost circuit of the central creation. The order of Michael knows the grand universe from one end to the other; there is no essential experience of any of the children of time and space in which the Michaels have not personally participated; they are in fact partakers not only of the divine nature but also of your nature, meaning all natures, from the highest to the lowest.

The original Michael is the presiding head of the primary Paradise Sons when they assemble for conference at the center of all things. Not long since on Uversa we recorded a universal broadcast of a conclave extraordinary on the eternal Isle of one hundred fifty thousand Creator Sons assembled in the parental presence and engaged in deliberations having to do with the progress of the unification and stabilization of the universe of universes. This was a selected group of Sovereign Michaels, sevenfold bestowal Sons.