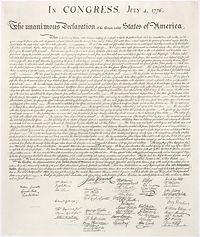 The United States Declaration of Independence was a statement adopted by the Second Continental Congress|on July 4, 1776, announcing that the thirteen American colonies then at war with Great Britain were no longer a part of the British Empire. Written primarily by Thomas Jefferson, the Declaration was a document formally explaining why Congress had voted on July 2 to declare independence from Great Britain, more than a year after the outbreak of the American Revolutionary War. Philosophically, the Declaration stressed two themes: individual rights and the right of revolution. The birthday of the United States of America—Independence Day—is celebrated on July 4, the day the wording of the Declaration was approved by Congress.

The central idea of the Declaration - the right to revolt against an oppressive government - continued to be widely held by Americans, and had an influence internationally, in particular the French Revolution. Abraham Lincoln, beginning in 1854 as he spoke out against slavery and the Kansas-Nebraska Act, provided a reinterpretation of the Declaration that stressed that the unalienable rights of “Life, Liberty and the pursuit of Happiness” were not limited to the white race. "Lincoln and those who shared his conviction" created a document with “continuing usefulness” with a “capacity to convince and inspire living Americans.”

"Lincoln and those who shared his convictions did not therefore give the nation a new past or revolutionize the Revolution. But as descendants of the revolutionaries and their English ancestors, they felt the need for a document that stated those values in a way that could guide the nation, a document the founding fathers had failed to supply. And so they made one, pouring old wine into an old vessel manufactured for another purpose, creating a testament whose continuing usefulness depended not on the faithfulness with which it described the intention of the signers but on its capacity to convince and inspire living Americans." The invocation by Lincoln in his Gettysburg Address of the Declaration of Independence defines for many Americans how they interpret it.

The Gettysburg Address has become an authoritative expression of the American spirit — as authoritative as the Declaration itself, and perhaps even more influential, since it determines how we read the Declaration. For most people now, the Declaration means what Lincoln told us it means, as a way of correcting the Constitution itself without overthrowing it. It is this correction of the spirit, this intellectual revolution, that makes attempts to go back beyond Lincoln to some earlier version so feckless. The proponents of states’ rights may have arguments, but they have lost their force, in courts as well as in the popular mind. By accepting the Gettysburg Address, its concept of a single people dedicated to a proposition, we have been changed. Because of it, we live in a different America. Jefferson's famous preamble:

We hold these truths to be self-evident, that all men are created equal, that they are endowed by their Creator with certain unalienable Rights, that among these are life, liberty and the pursuit of happiness.