From Nordan Symposia
(Redirected from Deduce)
Jump to navigationJump to search

Deductive reasoning is reasoning which uses deductive arguments to move from given statements (premises), which are assumed to be true, to conclusions, which must be true if the premises are true. 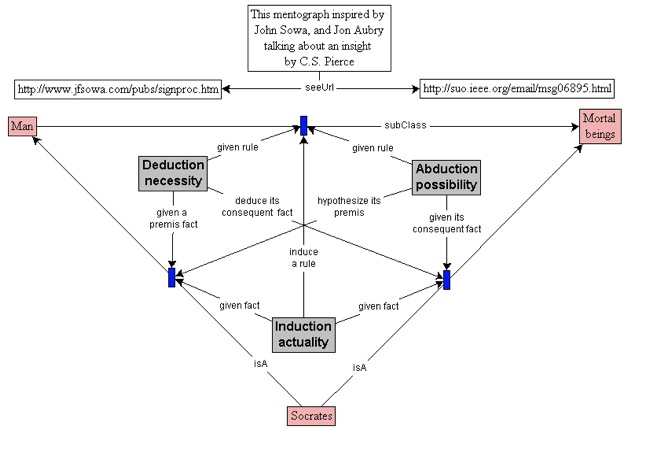 The classic example of deductive reasoning, given by Aristotle, is

Deductive reasoning was developed by Aristotle, Thales, Pythagoras, and other Greek philosophers of the Classical Period (600 to 300 B.C.). Aristotle, for example, relates a story of how Thales used his skills to deduce that the next season's olive crop would be a very large one. He therefore bought all the olive presses and made a fortune when the bumper olive crop did indeed arrive.Thales of Miletus

Deductive reasoning is dependent on its premises. That is, a false premise can possibly lead to a false result, and inconclusive premises will also yield an inconclusive conclusion.Brief Discussion on Inductive/Deductive Profiling

Alternative to deductive reasoning is inductive reasoning. The basic difference between the two can be summarized in the deductive dynamic of logically progressing from general evidence to a particular truth or conclusion; whereas with induction the logical dynamic is precisely the reverse. Inductive reasoning starts with a particular observation that is believed to be a demonstrative model for a truth or principle that is assumed to apply generally.

Deductive reasoning applies general principles to reach specific conclusions, whereas inductive reasoning examines specific information, perhaps many pieces of specific information, to impute a general principle. By thinking about phenomena such as how apples fall and how the planets move, Isaac Newton induced his theory of gravity. In the 19th century, Adams and LeVerrier applied Newton's theory (general principle) to deduce the existence, mass, position, and orbit of Neptune (specific conclusions) from perturbations in the observed orbit of Uranus (specific data).

The action of deducting.

1546 in Eng. Gilds (1870) 197 Wyth the yerely Resolutes and deduccions goyng out of the same. 1557 RECORDE Whetst. Xj, For subtraction your nombers are sette downe after the common maner, firste the totall, and then the deduction. 1703 T. N. City & C. Purchaser 55 In taking out the Deductions for the Doors and Windows.

1615 CHAPMAN Odyss. VI. 455 Take such way, That you yourself may compass..Your quick deduction by my father's grace. 1677 HALE Prim. Orig. Man. II. x. 228 Deductions of Colonies, and new Plantations. 1832 Blackw. Mag. XXXI. 574 The solemn deduction (to use the technical term) of a legitimate Roman colony.

1513 MORE Rich. III, Wks. 61 (R.) He sodainly lefte the matter, with which he was in hand, and without any deduction thereunto..began to repete those wordes again.

a1532 Remedie of Love (R.), Ordinately behoveth thee first to procede In deduction thereof [this werke]. 1603 FLORIO Montaigne I. ix. (1632) 17 A long counterfet deduction of this storie. 1670 EVELYN Mem. (1857) III. 222 A solemn deduction and true state of all affairs and particulars. 1748 CHESTERFIELD Lett. II. clix. 71 It..gives a clear deduction of the affairs of Europe from the treaty of Munster to this time. 1826 C. BUTLER Life Grotius 34 We have thus brought down our historical deduction of the German Empire to the accession of the Emperor Charles.

The first premise may be false yet anyone accepting the premises is compelled to accept the conclusion.

Deductive reasoning should be distinguished from the related concept of natural deduction, an approach to proof theory that attempts to provide a formal model of logical reasoning as it "naturally" occurs.

Sherlock Holmes, the fictional detective created by Sir Arthur Conan Doyle, is well known for referring to deductive reasoning in numerous of Doyle's stories. However, Holmes' most famous inferences were arguably cases of abduction.