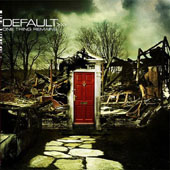 In law, a default is the failure to do something required by law or to appear at a required time in legal proceedings.

In the United States, for example, when a party has failed to file meaningful response to pleadings within the time allowed, with the result that only one side of a controversy has been presented to the court, the party who has pleaded a claim for relief and received no response may request entry of default. In some jurisdictions the court may proceed to enter judgment immediately: others require that the plaintiff file a notice of intent to take the default judgment and serve it on the unresponsive party. If this notice is not opposed, or no adequate justification for the delay or lack of response is presented, then the plaintiff is entitled to judgment in his favor. Such a judgment is referred to as a "default judgment" and, unless otherwise ordered, has the same effect as a judgment entered in a contested case.

It is possible to vacate or remove the default judgment, depending on the particular state's law.

Entry of default in the United States district courts is governed by Rule 55 of the Federal Rules of Civil Procedure.

For lessons on the topic of the Adamic Default, follow this link.

is a binding judgment in favor of the plaintiff when the defendant has not responded to a summons or has failed to appear before a court of law.

In a civil trial involving damages, a default judgment will enter the amount of damages pled in the original complaint. If proof of damages is required, the court may schedule another hearing on that issue.

A defendant can have a default judgment vacated, or set aside, by filing a motion, after the judgment is entered, by showing of a proper excuse.

In finance, default occurs when a debtor has not met his or her legal obligations according to the debt contract, e.g. has not made a scheduled payment, or has violated a loan covenant (condition) of the debt contract. A default is the failure to pay back a loan.[1] Default may occur if the debtor is either unwilling or unable to pay their debt. This can occur with all debt obligations including bonds, mortgages, loans, and promissory notes. Contents [show]

Distinction from insolvency and bankruptcy

The term default should be distinguished from the terms insolvency and bankruptcy.

Default can be of two types: debt services default and technical default. Debt service default occurs when the borrower has not made a scheduled payment of interest or principal. Technical default happens when an affirmative or a negative covenant is violated. Affirmative covenants are clauses in debt contracts that require firms to maintain certain levels of capital or financial ratios. The most commonly violated restrictions in affirmative covenants are tangible net worth, working capital/short term liquidity, and debt service coverage.

With most debt (including corporate debt, mortgages and bank loans) a covenant is included in the debt contract which states that the total amount owed becomes immediately payable on the first instance of a default of payment. Generally, if the debtor defaults on any debt to any lender, a cross default covenant in the debt contract states that that particular debt is also in default. In corporate finance, upon an uncured default, the holders of the debt will usually initiate proceedings (file a petition of involuntary bankruptcy) to foreclose on any collateral securing the debt. Even if the debt is not secured by collateral, debt holders may still sue for bankruptcy, to ensure that the corporation's assets are used to repay the debt.

There are several financial models for analyzing default risk, such as the Jarrow-Turnbull model, Edward Altman's Z-score model, or the structural model of default by Robert C. Merton (Merton Model).

Sovereign borrowers such as nation-states generally are not subject to bankruptcy courts in their own jurisdiction, and thus may be able to default without legal consequences. One example is with North Korea, which in 1987 defaulted on some of its loans. In such cases, the defaulting country and the creditor are more likely to renegotiate the interest rate, length of the loan, or the principal payments[2]. In the 1998 Russian financial crisis, Russia defaulted on its internal debt (GKOs), but did not default on its external Eurobonds. As part of the Argentine economic crisis in 2002, Argentina defaulted on $1 billion of debt owed to the World Bank.