From Nordan Symposia
(Redirected from Dissect)
Jump to navigationJump to search 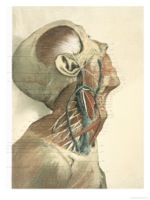 Dissection (also called anatomization) is usually the process of disassembling and observing something to determine its internal structure and as an aid to discerning the functions and relationships of its components.

Dissection is usually applied to the examination of plants and animals. The term is also used in relation to mechanisms, computer programs, written materials, etc., as a synonym for terms such as reverse engineering or literary deconstruction. Dissection is usually performed by students in courses of biology, botany and anatomy and in association with medical and arts studies.

Vivisection refers to the dissection of a living animal, often for the purposes of physiological investigation and nowadays always under heavy sedation. However, the term is no longer widely used, in part because more sophisticated techniques have superseded it for many applications. The term is now almost entirely used in a pejorative sense by those who oppose animal testing of any sort.

Dissection is often performed as a part of determining a cause of death in autopsy (on humans) and necropsy (on animals) and is an intrinsic part of forensic medicine, such as would be practiced by a coroner. [1]