From Nordan Symposia
(Redirected from Dissipate)
Jump to navigationJump to search 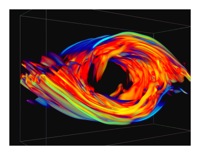 In physics, dissipation embodies the concept of a dynamical system where important mechanical models, such as waves or oscillations, lose energy over time, typically from friction or turbulence. The lost energy converts into heat, which raises the temperature of the system. Such systems are called dissipative systems.

For example, a wave that loses amplitude is said to dissipate. The precise nature of the effects depends on the nature of the wave: an atmospheric wave, for instance, may dissipate close to the surface due to friction with the land mass, and at higher levels due to radiative cooling.

Dissipating forces are those that can not be described by Hamiltonian formalism. Loosely speaking, this includes friction, and all similar forces that result in decoherency of energy—that is, conversion of coherent or directed energy flow into an indirected or more isotropic distribution of energy.

In computational physics, numerical dissipation (also known as "numerical diffusion") refers to certain side-effects that may occur as a result of a numerical solution to a differential equation. When the pure advection equation, which is free of dissipation, is solved by a numerical approximation method, the energy of the initial wave may be reduced in a way analogous to a diffusional process. Such a method is said to contain 'dissipation'. In some cases, "artificial dissipation" is intentionally added to improve the numerical stability characteristics of the solution.

A formal, mathematical definition of dissipation, as commonly used in the mathematical study of measure-preserving dynamical systems, is given in the article wandering set.