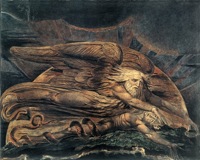 Elohim (אֱלהִים) is a plural formation of eloah, an expanded form of the Northwest Semitic noun il (אֱל, ʾēl [1]). It is the usual word for "god" in the Hebrew Bible, referring both to pagan deities and to the God of Israel, usually with a singular meaning despite its plural form, but is also used as a true plural with the meanings "spirits, angels, demons," and the like.[2] The singular forms eloah (אלוה) and el (אֱל) are used as proper names or as generics, in which case they are interchangeable with elohim.[3] Gods can be referred to collectively as bene elim, bene elyon, or bene elohim.[4]

The notion of divinity underwent radical changes throughout the period of early Israelite identity. The ambiguity of the term Elohim is the result of such changes, cast in terms of "vertical translatability" by Smith (2008); i.e. the re-interpretation of the gods of the earliest recalled period as the national god of the monolatrism as it emerged in the 7th to 6th century BC in the Kingdom of Judah and during the Babylonian captivity, and further in terms of monotheism by the emergence of Rabbinical Judaism in the 2nd century AD.[5]

The Dictionary of Deities and Demons in the Bible defines "elohim" as a plural of eloah, an expanded form of the common Semitic noun "'il" (ʾēl).[6] It contains an added heh as third radical to the biconsonantal root. Discussions of the etymology of elohim essentially concern this expansion. An exact cognate outside of Hebrew is found in Ugaritic ʾlhm, the family of El, the creator god and chief deity of the Canaanite pantheon, and in Arabic ʾilāh "god, deity" (or Allah as " The [single] God"). "El" (the basis for the extended root ʾlh) is usually derived from a root meaning "to be strong" and/or "to be in front".[7]

In the Levantine pantheon, the Elohim are the 70 sons of El the Ancient of Days (Olam) assembled on the divine holy place, Mount Zephon (Jebel Aqra). This mountain, which lies in Syria, was regarded as a portal to its heavenly counterpart. The Elohim were originally ruled by El Elyon (God Most High), but He later hands His rule down to the god called Hadad who was known among the common people as "the master" ("Baal"). Assembled on the holy mountain of heaven and ruled by one, the pantheon (Elohim) acts as one. The enemy of the Elohim is Yam ("the sea"), a chaos monster slain by Baal. Each son was allocated to a specific people (e.g. Yahweh to Israel, Milcom to Moab etc.). [edit] Hebrew bible

The word occurs more than 2500 times in the Hebrew bible, with meanings ranging from "god" in a general sense (as in Exodus 12:12, where it describes "the gods of Egypt"), to a specific god (e.g., 1 Kings 11:33, where it describes Chemosh "the god of Moab", or the frequent references to Yahweh as the "elohim" of Israel), to demons, seraphim, and other supernatural beings, to the spirits of the dead brought up at the behest of King Saul in 1 Samuel 28:13, and even to kings and prophets (e.g., Exodus 4:16)[8] The phrase bene elohim, usually translated "sons of God", has an exact parallel in Ugaritic and Phoenician texts, referring to the council of the gods.[9] [edit] Grammatical number

In linguistics, grammatical number is a grammatical category of nouns, pronouns, and adjective and verb agreement that expresses count distinctions (such as "one" or "more than one").[10]

The form of the word Elohim, with the ending -im, is plural and masculine, but the construction is usually singular, i.e. it governs a singular verb or adjective when referring to the Hebrew god, but reverts to its normal plural when used of heathen divinities (Psalms 96:5; 97:7). Some exceptions include Gen. 20:13, 35:7, 2 Sam. 7:23 and Ps. 58:11, and notably the epithet of the "Living God" (Deuteronomy 5:26 etc.), which is constructed with the plural adjective, אלהים חיים. Even in these cases, the Septuagint translation has the singular ὁ θεὸς, and modern translations follow suit in giving "God" in the singular.[11]

The meaning of Elohim is further complicated by the fact that it is used to describe the spirit of the dead prophet Samuel, raised by Saul in 1 Samuel 28:13. The witch of Endor tells Saul that she sees 'gods' (elohim) coming up out of the earth; this seems to indicate that the term was indeed used simply to mean something like 'divine beings' in ancient Israel. The Elohim as a pantheon might also have been considered a singular in the sense of m a collective plural when the gods act in concert.

The use of plural forms for singular nouns is common in the Hebrew Bible, and often connotes quintessence, uniqueness, or might rather than plurality (though it may connote both). Thus, the phrase "מלך מלכי המלכים" ("melekh maləkêi ha-məlâkhim") does not refer to "a king, kings of kings", but to "a king of unsurpassed kingship"; ימים רבים ("yamim rabim") refers to "a great sea" as easily as to "great [or 'many'] seas". The technical term for "plural" in Hebrew grammar is lâshon rabbim, meaning a term of grandiosities.[citation needed]

Elohim occurs frequently throughout the Torah. In some cases (e.g. Exodus 3:4, "... Elohim called unto him out of the midst of the bush ..."), it acts as a singular noun in Hebrew grammar, and is then generally understood to denote the single God of Israel. In other cases, Elohim acts as an ordinary plural of the word Eloah, and refers to the polytheistic notion of multiple gods (for example, Exodus 20:3, "Thou shalt have no other gods before me."). In still other cases, the meaning is not clear from the text, but may refer to powerful beings (e.g. Genesis 6:2, "... the sons of the Elohim (e-aleim) saw the daughters of men (e-adam, the adam) that they were fair; and they took them for wives... ," Exodus 4:16, "He will speak to the people for you, and it will be as if he were your mouth and as if you [Moses] were Elohim to him [Aaron]... ," Exodus 22:28, "Thou shalt not revile Elohim, or curse a ruler of your people... ," where the parallelism suggests that Elohim may refer to human rulers) (see Sons of God).

The choice of word or words for God varies in the Hebrew Bible. According to the documentary hypothesis these variations are evidence of different source texts: Elohim is used as the name of God in the Elohist and the Priestly source, while Yahweh is used in the Jahwist source. The difference in names results from the theological point being made in the Elohist and Priestly sources that God did not reveal his name, Yahweh, to any man before the time of Moses.

While the Jahwist presented an anthropomorphic God who could walk through the Garden of Eden looking for Adam and Eve, the Elohist frequently involves angels. For example, it is the Elohist version of the tale of Jacob's ladder in which there is a ladder of angels with God at the top, whereas in the Jahwist tale, it is a simple dream in which God is simply above the location, without the ladder or angels. Likewise, the Elohist describes Jacob actually wrestling with God. [edit] Rabbinic Judaism

I must premise that every Hebrew knows that the term Elohim is a homonym, and denotes God, angels, judges, and the rulers of countries, ...[12]

Modern Judaism forbids[citation needed] the use of the word "Elohim" under the belief that "Elohim" is one of God's names, and that speaking his name out loud is forbidden by the Torah. Therefore, when said out loud outside of prayer, and when written not by a Sofer Stam, the word's fourth letter hei (Hebrew: ה') is replaced by the letter kof (Hebrew: ק), which is similar in shape but completely changes the phonetic pronunciation of the word from "Elohim" to "Elokim". In Hebrew culture it is often easy to differentiate religious people from secular people by the former's use of the word "Elokim" or "Hashem" (Hebrew: השם, meaning "The Name") instead of the word "Elohim". Other names of God are also replaced, such as "Adonai" (In writing it is replaced by the letter hei and when spoken is replaced by either "Hakadosh Baruch-Hu" (Hebrew: הקדוש ברוך-הוא, meaning "The Holy One, Blessed He Is") or simply "Hashem."

In some Sacred name Bibles, like The Scriptures 98 and Restored Name King James Version the word "Elohim" is used in many places in the New Testament where the word theos is found in the Greek text (such as John 1:1 and John 10:36). Though there are no attested early Biblical manuscripts of the New Testament with "Elohim", the editors of such translations appeal to the fact that the Syriac word ܐܠܗܐ Aloha, the source of Hebrew Eloah, is found in the Syriac bible text.