From Nordan Symposia
(Redirected from Exclaim)
Jump to navigationJump to search 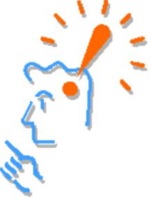 The exclamation mark comes from the term “note of admiration”, in which admiration referred to its Latin sense of wonderment. One theory of its origin is that it was originally the Latin word for “joy” (Io), written with the “I” written above the “o”.

The exclamation mark was introduced into English printing in the 15th century, and was called the “sign of admiration or exclamation” or the “note of admiration” until the mid-17th century. In German orthography, the sign made its first appearance in the Luther Bible in 1797.

The mark was not featured on standard manual typewriters before the 1970s. Instead, one typed a period, backspaced, and then typed an apostrophe.[1]