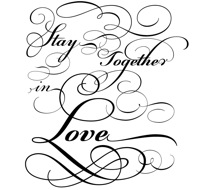 The term font, a doublet of the word fondue, derives from Middle French font, meaning "(something that has been) melt(ed)", referring to type produced by casting molten metal at a type foundry. English-speaking printers have used the term fount for centuries to refer to the multi-part metal type used to assemble and print in a particular size and typeface.

Font nowadays is frequently used synonymously with the term "typeface", although before the advent of digital typography and desktop publishing, "font" referred to a single size and "typeface" referred to a set of otherwise identical fonts of different sizes.

Beginning in the 1980s, with the introduction of computer fonts, a broader definition for the term "font" evolved. Different sizes of a single style—separate fonts in metal type—are now generated from a single computer font, because vector shapes can be scaled freely. "Bulmer", the typeface, may include the fonts "Bulmer roman", "Bulmer italic", "Bulmer bold" and "Bulmer extended", but there is no separate font for "9-point Bulmer italic" as opposed to "10-point Bulmer italic".

There are thousands of typefaces.[1]