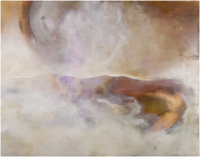 Heaven and Earth by Markowitz

Giclée pronounced|ʒiːˈkleɪ"zhee-clay" or dʒiːˈkleɪ, from French ʒiˈkle, is an invented name for the process of making fine art prints from a digital source using ink-jet printing. The word "giclée", from the French language word "le gicleur" meaning "nozzle", or more specifically "gicler" meaning "to squirt, spurt, or spray" dpandi.com, "What's In a Name: The True Story of Giclée" By Harald Johnson . It was coined by Jack Duganne, a printmaker working in the field, to represent any inkjet-based digital print used as fine art. The intent of that name was to distinguish commonly known industrial "Iris proofs" from the type of fine art prints artists were producing on those same types of printers. The name was originally applied to fine art prints created on Iris printers in a process invented in the early 1990's but has since come to mean any high quality ink-jet print and is often used in galleries and print shops to denote such prints.

The earliest prints to be called "Giclée" were created in the early 1990s on the Iris Graphics models 3024, 3047, 4012 or "Realist" colour drum continuous Hertz inkjet printers (the company was later taken over by Scitex. Iris printers were originally developed to produce prepress proofs from digital files for jobs where color matching was critical such as product containers and magazine publication. Their output was used to check what the colors would look like before mass production began. Much experimentation took place to try to adapt the Iris printer to the production of color faithful, aesthetically pleasing reproductions of artwork. Early Iris prints were relatively fugitive and tended to show color degradation after only a few years. The use of newer inksets and printing substrates have extended the longevity and light fastness of Iris prints.

Beside its association with Iris prints, in the past few years, the word “giclée,” as a fine art term, has come to be associated with prints using fade-resistant "archival" inks (including solvent inks) and the inkjet printers that use them. These printers use the CMYK color process but may have multiple cartridges for variations of each color based on the CcMmYK color model (e.g. light magenta and light cyan inks in addition to regular magenta and cyan) which serves to increase the apparent resolution and color gamut and allows smoother gradient transitions signindustry.com, "8-Color Printing: What’s Hype and What’s Real?" By Judith Vandsburger. The most common printers used are models from manufacturers such as Canon, Eastman Kodak, Epson]], Hewlett-Packard, ITNH Ixia, Mimaki, Mutoh, ColorSpan, and Roland DGA. A wide variety of substrates are available including various textures and finishes such as matte photo paper, watercolor paper, cotton canvas, or artist textured vinyl. Indeed, a new industry has been created in supplying the media for this emerging market.

Artists tend to use these types of inkjet printing processes commonly called "Giclée" to make reproductions of their original two-dimensional artwork, photographs or computer generated art. Professionally produced inkjet prints are much more expensive on a “per print” basis than the traditional four color offset lithography process originally used to make such reproductions (a large format inkjet can cost more than $50 a print, not including scanning and color correction, as opposed to $5 a print for a four-color offset litho of the same image printed in a run of 1000). However, since the artist does not need to pay for, market and store large print runs, and since the artist can print and sell each print individually to match demand, inkjet printing is used as an economical alternative to producing large runs of four color offset prints. Inkjet printing has the added advantage of allowing the artist to control every aspect of the image, its color and the substrate printed on, and even allows the artist to own and operate the printer itself.