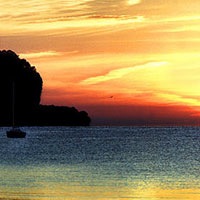 A harbor or harbour (see spelling differences), or haven, is a place where ships, boats, and barges can seek shelter from stormy weather, or else are stored for future use. Harbors can be man-made or natural. A man-made harbor has deliberately-constructed breakwaters, sea walls, or jettys, or otherwise, they could have been constructed by dredging, and these require maintenance by further periodic dredging. An example of the former kind is at Long Beach Harbor, California, and an example of the latter kind is San Diego Harbor, California, which was, under natural conditions, too shallow for modern merchant ships and warships. In contrast, a natural harbor is surrounded on several sides by prominences of land. An example of this kind of harbor is San Francisco Bay, California.

Harbors and ports are often confused with each other. A port is a man-made sea coast, lakeshore, or river shore facility where ships, boats, and/or barges have loading and unloading procedutes carried out, including those for passengers or livestock. A port may consist of piers, docks, quays, wharves, jettys, and/or slipways, all of which can have cargo cranes, grain elevators, ramps, and/or bulk-cargo handling machinery utiling conveyor belts built upon them. For example, very long conveyor belts are used for loading and unloading coal or ores to/from ships and barges. Furthermore, ports may have equipment for loading or unloading petroleum or other liquid cargos to/from tankers.

Ports often have warehouses and other buildings for the storage and distribution of goods, or have magazine buildings for naval ordinance and other explosives. There are also ground transportation systems that connect the port with inland locations, such as railroad terminals, truck terminals, and/or pipeline terminals for carrying goods and materials to and from the port.[1]