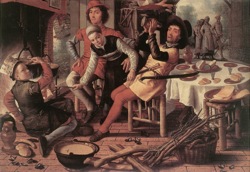 In common historic and modern usage, a hearth (Har-th) is a brick- or stone-lined[fireplace or oven used for cooking and/or heating. Because of its nature, in historic times the hearth was considered an integral part of a home, often its central or most important feature: its Latin name is focus.

This concept has been generalized to refer to a homeplace or household, as in the terms "hearth and home" and "keep the home fires burning." In fireplace design, the hearth is often considered the visible elements of the fireplace, with emphasis upon the floor level extension of masonry associated with the fireplace mantel.

In archaeology, a hearth is a firepit or other |fireplace feature of any period. Hearths are common features of many eras going back to prehistoric campsites, and may be either lined with a wide range of materials or left unlined. Hearths were used for cooking, heating, and processing of some stone, wood, faunal, and floral deform or disperse hearth features, making them difficult to identify without careful study.

Lined hearths are easily identified by the presence of fire-cracked rock, often created when the heat from the fires inside the hearths chemically altered and cracked the stone. Often present are fragmented fish and animal bones, carbonized shell, charcoal, ash, and other waste products, all embedded in a sequence of soil that has been deposited atop the hearth. Unlined hearths, which are less easily identified, may also include these materials. Because of the organic nature of most of these items, they can be used to pinpoint the date the hearth was last used via the process of radiocarbon dating. Although carbon dates can be negatively affected if the users of the hearth burned old wood or coal, the process is typically quite reliable. This was the most common way to heat interior spaces and for cooking in cool seasons.

In the Byzantine Empire a tax on hearths known as kapnikon was first explicitly mentioned for the reign of Nicephorus, I although its context implies that it was already then old and established and perhaps it should be taken back to the 7th century AD. Kapnikon was a tax raised on households without exceptions for the poor.

In England, a tax on hearths was introduced on 19 May 1662. Householders were required to pay a charge of two shillings per annum for each hearth, with half the payment due at Michaelmas and half at Lady Day. Exemptions to the tax were granted, to those in receipt of poor relief, those whose houses were worth less than 20 shillings a year and those who paid neither church nor poor rates. Also exempt were charitable institutions such as schools and almshouses, and industrial hearths with the exception of smiths' forges and bakers' ovens. The returns were lodged with the Clerk of the Peace between 1662 and 1688.

The tax was abolished by William III in 1689 and the last collection was for Lady Day of that year. It was abolished in Scotland in 1690.

Hearth tax records are important to |local historians as they provide an indication of the size of each assessed house at the time. The numbers of hearths are generally proportional to the size of the house. The assessments can be used to indicate the numbers and local distribution of larger and smaller houses. Not every room had a hearth, and not all houses of the same size had exactly the same number of hearths, so they are not an exact measure of house size. Roehampton University has an ongoing project which places hearth tax data in a national framework by providing a series of standard bands of wealth applicable to each county and city.

Published lists are available of many returns and the original documents are in the Public Record Office. The most informative returns, many of which have been published, occur between 1662-1666 and 1669-1674.

Hearth is also a term for a kindred, or local worship group, in the neopaganism religion Ásatrú.

In Greek Mythology, Hestia is the goddess of the hearth.

1. a. That part of the floor of a room on which the fire is made, or which is beneath the fire-basket or grate; the paved or tiled floor of a fireplace.

fig. 1594 T. B. La Primaud. Fr. Acad. II. To Rdr. 7 The heart is the harth from whence proceedeth all that inset and natiue heate. 1866 B. TAYLOR Icarus Poems 247 Hearths of air Whereon the Morning burns her hundred fires.

b. A portable receptacle for fire, or flat plate on which it may be made.

1618 BOLTON Florus (1636) 321 Carrying, for as it were his crest, a chafing-dish or little hearth upon his helmet, and the coales thereof kindling with the motion of his body. 1665 Sir T. Roe's Voy. E. Ind. 359 They..bake it upon small round iron hearths, which they carry with them. 1845 E. ACTON Mod. Cookery vii. 191 The hot plates, or hearths with which the kitchens of good houses are always furnished.

2. As typical of the household or home; the home, ‘fireside’. Often in the alliterative phrase hearth and home.

3. Technical. a. The fireplace of a smith's forge. b. The floor in a reverberatory furnace on which the ore, or in a puddling furnace on which the iron, is exposed to the flame. c. The hollow at the bottom of a blast-furnace through which the molten metal descends to the crucible. d. A portable brazier or chafing-dish used in soldering. e. In cylinder glass manufacture: A spreading frame. open-hearth furnace, a form of regenerative furnace of the reverberatory type used in some processes of making steel; hence open-hearth steel.

1398 TREVISA Barth. De P.R. VI. xxix. (Tollem. MS.), e eyer at blowe in e ere [1535 forge] is hoot and dry; hit hete and dryesmeis. 1645 G. BOATE in Nat. Hist. Irel. (1726) 76 The [melted] iron itself descendeth to the lowest part of the furnace called the hearth; the which being filled..they unstop the hearth, and open the mouth therof. 1693 LISTER in Phil. Trans. XVII. 866 Those Bars which are wrought out of a Loop, taken up out of the Finnery Harth, or second Forge, are much better Iron than those which are made in the Bloomary or first Harth. Ibid. 867 Set in the Smiths Forge or Harth, a Crucible, or Dish of Crucible Metal. 1872 RAYMOND Statist. Mines & Mining 125 The furnaces must be differently constructed..the walls must come down straight to the hearth, or contract gradually. 1875 Ure's Dict. Arts II. 996 The puddling furnace..is divided interiorly into three parts; the fireplace, the hearth, and the flue. 1883 CRANE Smithy & Forge 10 The smith's hearth, when of the largest description, is a kind of trough of brick~work about six feet square, elevated several inches from the floor of the smithy. 1894 Harper's Mag. Jan. 412 It may be crucible, Bessemer, or open-hearth steel.

4. attrib. and Comb., as a. hearth-broom, -brush, -fire, -holder, -light, -place, -side, -staff, -tool; hearth-baken adj.; b. hearth-book, a book containing a list of hearths for the purpose of the HEARTH-TAX; hearth-bottom, the stone which forms the bed of a blast-furnace; hearth-cake, a cake baked on the hearth; hearth-cinder, the slag formed on the refinery-hearth; hearth-cricket, the common house-cricket; hearth-ends, particles of unreduced lead ore from a blast-furnace; hearth-fellow, a fireside companion; hearth-fly, a kind of artificial fly used in angling; hearth-plate, a cast-iron plate forming the hearth of a reverberatory furnace; hearth-stock, = HEAD-BLOCK 1; hearth tidy, a pan for containing the ashes that fall from a fireplace; hearth-warming, a merry-making to handsel a new house; a house-warming; hearth-yeld = HEARTH-PENNY. Also HEARTH-MONEY, -PENNY, -RUG, -STONE, -TAX.