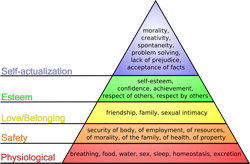 A hierarchy is an arrangement of objects, people, elements, values, grades, orders, classes, etc., in a ranked or graduated series. The word derives from the Greek ἱεραρχία}} (hierarchia), from ἱεράρχης (hierarches), "president of sacred rites, high-priest" and that from ἱερός (hieros), "sacred" + ἄρχω (arkho), "to lead, to rule" [1] Online Etymology Dictionary. The word can also refer to a series of such items so arranged. Items in a hierarchy are typically thought of as being "above," "below," or "at the same level as" one another. (Oxford English Dictionary ISBN 0-19-861186-2)

For lessons on the topic of Hierarchy, follow this link.

This is as opposed to anarchy where there is no concept of higher or lower items (or people) -- everything is considered equal.

The first use of the word "hierarchy" cited by the Oxford English Dictionary was in 1880, when it was used in reference to the three orders of three angels as depicted by Pseudo-Dionysius the Areopagite. Pseudo-Dionysius used the word both in reference to the celestial hierarchy and the ecclesiastical hierarchy. [2] His term is derived from the Greek for 'Bishop' (hierarch), and Dionysius is credited with first use of it as an abstract noun. Since hierarchical churches, such as the Roman Catholic and Eastern Orthodox churches, had tables of organization that were "hierarchical" in the modern sense of the word (traditionally with God as the pinnacle of the hierarchy), the term came to refer to similar organizational methods in more general settings.

A hierarchy can link entities either directly or indirectly, and either vertically or horizontally. The only direct links in a hierarchy, insofar as they are hierarchical, are to one's immediate superior or to one of one's subordinates, although a system that is largely hierarchical can also incorporate other organizational patterns. Indirect hierarchical links can extend "vertically" upwards or downwards via multiple links in the same direction. All parts of the hierarchy which are not vertically linked to one another can nevertheless be "horizontally" linked by traveling up the hierarchy to find a common direct or indirect superior, and then down again. This is akin to two co-workers, neither of whom is the other's boss, but both of whose chains of command will eventually meet.

These relationships can be formalized mathematically.[3]