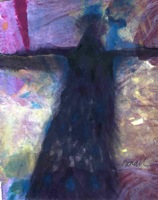 Higher Power is a term coined in the 1930s in Alcoholics Anonymous (AA) and is used in other twelve-step programs. It is also sometimes referred to as a power greater than ourselves and is frequently abbreviated to HP.

Sources that may have contributed to the adoption of the term in Alcoholics Anonymous (AA), the first twelve-step group, include spirituality, New Thought and the work of William James. James, who wrote "The only cure for dipsomania is religiomania" in The Varieties of Religious Experience, is cited in the 'Spiritual Experience' appendix of Alcoholics Anonymous (also known as the "Big Book").

Sociologist Darren Sherkat researched the belief of Americans in a higher power. He based his research on data from 8,000 adults polled by the Chicago-based National Opinion Research Center between 1988 and 2000. Among his findings were that 8% stated "I don't believe in a personal god, but I do believe in a higher power of some kind." This is the same figure as found by the 1999 Gallup national poll of Americans. Sherkat also found that 16% of the Jewish people surveyed agreed with the statement about a 'higher power', while 13.2% of liberal Protestants and 10.6% of Episcopalians also agreed with it.

An empirically based recovery framework likened faith in a higher power to motivation for personal growth as described by Abraham Maslow and Carl Rogers.

In current twelve-step program usage a higher power can be anything at all that the member believes is adequate. Reported examples include their twelve-step group, Nature, consciousness, existential freedom, God, science, Buddha. It is frequently stipulated that as long as a higher power is "greater" than the individual, then the only condition is that it should also be loving and caring.

The terms 'higher power' and 'power greater than ourselves' appear in the "Big Book", on three occasions: